NOTICE: Becker on Medicine, Law, and the State in Imperial Russia

Elisa M Becker (George Washington University)'s Medicine, Law, and the State in Imperial Russia, from the Central European University (CEU) Press might be of interest:

Examines the theoretical and practical outlook of forensic physicians in Imperial Russia, from the 18th to the early 20th centuries, arguing that the interaction between state and these professionals shaped processes of reform in contemporary Russia. It demonstrates the ways in which the professional evolution of forensic psychiatry in Russia took a different turn from Western models, and how the process of professionalization in late imperial Russia became associated with liberal legal reform and led to the transformation of the autocratic state system.
Read more »
Posted by Unknown at 12:07 AM No comments:

The secular tradition of modern European jurisprudence agrees on the basic assumption that law is actually ‘made’ in one way or another. The conditions and procedures of law-making are subject to constant change and, accordingly, the creation of legal norms is one of the major areas of research for legal historians. The questions they ask relate to the legitimacy of normative acts, their economic, political and social impetus or even the media of their representation. Scholars direct their attention at all stages of the legislative process, i.e. from the very first considerations to the publication of a legal act.

NOTICE: Brown and Donlan on The Laws and Other Legalities of Ireland, 1689–1850

Michael Brown (Aberdeen) and Seán Patrick Donlan (Limerick) have published, with Ashgate, The Laws and Other Legalities of Ireland, 1689–1850:

This collection is the first to concentrate attention on the actual relationship that existed between the Irish population and the state under which they lived from the War of the Two Kings (1689–1691) and the Great Famine (1845–1849). Particular attention is paid to an understanding of the legal character of the state and the reach of the rule of law, addressing such themes as how law was made and put into effect; how ordinary people experienced the law and social regulations; and how Catholics related to the legal institutions of the Protestant confessional state. These themes will help to situate the study of Irish society into the mainstream of English and European social history.
The contents include:

As part of its extraordinary and ongoing mission to republish valuable legal texts of the past, the Lawbook Exchange has announced the publication of 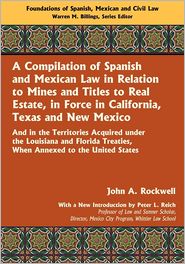 John A Rockwell, A Compilation of Spanish and Mexican Law in Relation to Mines and Titles to Real Estate, in Force in California, Texas and New Mexico; and in the Territories Acquired Under the Louisiana and Florida Treaties When Annexed to the United States (1851), with a new introduction by Peter L Reich
This is the latest text from the Foundations of Spanish, Mexican and Civil Law series (Warren M Billings, series editor). Other titles in the series include:

NOTICE: Morigiwa, Stolleis, and Halperin on the Interpretation of Law in the Age of Enlightenment

I’ve just become aware of the release (by Springer) of a very interesting text by Yasutomo Morigiwa, Michael Stolleis, and Jean-Louis Halperin (eds), Interpretation of Law in the Age of Enlightenment: From the Rule of the King to the Rule of Law (2011):

This book examines the actual practice of the interpretation of law in the Age of Enlightenment versus the ideology of the Age and explains the reason for and difference between the two. The ideology of the Age of Enlightenment was that law, i.e., the will of the sovereign, can be explicitly and appropriately stated, thus making interpretation redundant. However, the reality was that in the 18th century, there was no one leading source of national law that would be the object of interpretation. Instead, there was a plurality of sources of law: the Roman Law, local customary law, and the royal ordinance. Yet, in deciding a case in a court of law, the law must speak with one voice, making interpretation to unify the norms inevitable. This book discusses the process involved and the role played by justification in terms of reason - the hallmark of Enlightenment.
The table of contents includes:

Posted by Unknown at 9:13 PM No comments: