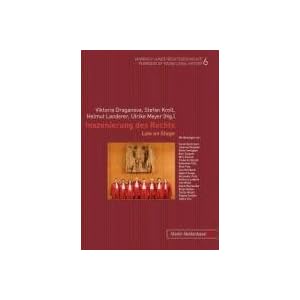 Inszenierung des Rechts - Law on Stage [6 Jahrbuch Junge Rechtsgeschichte - Yearbook of Young Legal History 2010] is now available through Martin Meidenbauer Verlag or http://www.amazon.de/Die-Inszenierung-Rechts-Law-Stage/dp/3899752422/ref=sr_1_6?ie=UTF8&qid=1311695066&sr=8-6. The book (344 pages) contains a selection of papers presented at the 16th European Forum of Young Legal Historians organized at the Johann-Wolfgang-Goethe-Universität in Frankfurt in March 2010.
Table of contents:

Read more »
Posted by Frederik Dhondt at 2:45 PM No comments:

NOTICE: The “Political Arithmetick” of Empires in the Early Modern Atlantic World, 1500–1807

I received word last night about a conference on 'The “Political Arithmetick” of Empires in the Early Modern Atlantic World, 1500–1807'. It's Sponsored by the Department of History, University of Maryland, College Park, and the Omohundro Institute of Early American History and Culture. It'll take place from March 17–18, 2012 at the University of Maryland, College Park:

This conference takes its title from the celebrated pamphlet of Sir William Petty published in 1690. The organizers are particularly eager to receive submissions from scholars working on subjects that Petty and his contemporaries believed formed the basis of the new concept of “political economy,” especially as these related to the Americas from the sixteenth century through the eighteenth.

Petty’s pamphlet was largely devoted to the question of how best to construct an English empire within which trade, people, and nation would flourish. His calculations involved not only economic factors but also issues of authority, hierarchy, and justice. The purpose of this conference is to examine the many components, economic as well as cultural, that cohered and/or fractured empires in the early modern Atlantic world between 1500 and 1807.

The organizers encourage papers that examine the religious, cultural, or economic components that shaped the formation of imperial structures in the early modern era. Topics such as religious conformity or the lack thereof, paper money, credit, agriculture, manufacturing, trade, piracy, and monopoly as they related to the creation and expansion of empires are appropriate. So, too, are demography, slavery, the Native American presence, and the migration of labor, whether free or indentured. Finally, the organizers welcome proposals on the ideological character of domestic and international law and the role of ideas in determining the configuration of early modern empires. These subjects may be addressed by focusing exclusively on a single empire or within a comparative context.

Proposals consisting of a maximum of 300 words must be received electronically no later than July 31, 2011. Please include a two-page c.v. that contains your current mailing and e-mail addresses and your telephone number. Materials may be submitted online at the conference Web site, http://oieahc.wm.edu/conferences/political/cfp.cfm. All submissions will be acknowledged by e-mail. If you do not receive an acknowledgement, please resubmit or contact Kim Foley (kawahl@wm.edu).

Posted by Unknown at 2:05 PM No comments:

I just received the following message--very much in the spirit of some of our members--about the 47th International Congress on Medieval Studies:

I'm running a panel on legal history at the 47th International Congress on Medieval Studies, May 10-13, 2012, in Kalamazoo, Michigan. The title of the panel is Law as Culture: Legal Development and Social Change. The general call for papers is here( http://www.wmich.edu/medieval/Assets/pdf/congress/CallForPapers2012.pdf).

The Law as Culture series has been going on at Kalamazoo most years since 1994, sponsored much of the time (including this time) by the Selden Society; for the last couple of years, I've been co-organizing these panels with medieval historian Paul Hyams of Cornell. Here are a few paragraphs I wrote about it; the last paragraph has been recycled from earlier CFPs:

Law was an important part of medieval culture, just as in modern culture.

High and low people alike regularly attended some court or other - serfs attended their lord's court while barons attended the royal court - and rates of litigation (for instance in medieval England) were surprisingly high (by modern standards). Feudalism, an important medieval institution, was largely (though not exclusively) a set of legal rules, and disputes over the overlapping jurisdictions of secular and ecclesiastical courts played a large role in the evolution of church-state relations. The legal system shaped medieval society just as it was shaped by it. The historian of medieval law must study social, economic, and cultural history, but the historian of medieval society, economy, and culture must also study the law.

This panel, therefore, will explore the intersection among law, economics, and culture in the context of the evolution of medieval European law.

This session is part of a series of panels under the general title of "Law as Culture in the Middle Ages" that ran first from 1994 to 2003, and was revived in 2010. The Anglo-American Selden Society has stood sponsor for much of this time. The series has succeeded in bringing together literary scholars, lawyers and historians in the special atmosphere of Kalamazoo and to their mutual benefit, to consider the contributions, good and bad, which Law made to the culture of the Middle Ages. Papers have been presented by scholars of the two learned laws (canon and Roman), of secular laws (especially the Anglo-American Common Law), and of vernacular literatures (especially Old French, Old and Middle English). They have drawn enthusiastic audiences that have filled and on occasion overflowed from the rooms allotted them. We have been able to offer a hearing to young scholars alongside some very well known ones.

For this panel, I welcome any papers on medieval legal history.

English legal history is welcome; so is Continental legal history, canon law, or any other tradition practiced in the medieval West, e.g. Jewish or Islamic law.

The concept of "medieval" at Kalamazoo tends to be fairly broad, so you often find papers dealing with late Antiquity on one end, and the Renaissance on the other.

Especially, as the title "Law as Culture" hints, papers are encouraged that draw connections between law and other fields, especially in the humanities or economics (though doctrinal legal papers are also fine).

Those who are interested should send me an abstract at volokh at post dot harvard dot edu by September 15, 2011.

I just learned of the 47th International Congress on Medieval Studies. The conference:

The Congress is an annual gathering of over 3,000 scholars interested in Medieval Studies. It features over 550 sessions of papers, panel discussions, roundtables, workshops, and performances. There are also some 90 business meetings and receptions sponsored by learned societies, associations, and institutions. The exhibits hall boasts nearly 70 exhibitors, including publishers, used book dealers, and purveyors of medieval sundries. The Congress lasts three and a half days, extending from Thursday morning until Sunday at noon.
Posted by Unknown at 10:53 AM No comments:

NOTICE: Jansen on The Making of Legal Authority

I just noticed that Nils Jansen's The Making of Legal Authority: Non-legislative Codifications in Historical and Comparative Perspective (2010) was not noted here last year. It seemed relevant enough to the ESCLH to do so now.

Accounts of the nature of legal authority typically focus on the authority of officially sanctioned rules issued by legally recognised bodies - legislatures, courts and regulators - that fit comfortably within traditional state-centred concepts of law. Such accounts neglect the more complex processes involved in acquiring legal authority.
Throughout the history of modern legal systems texts have come to acquire authority for legal officials without being issued by a legislature or a court. From Justinian's Institutes and Blackstone's Commentaries to modern examples such as the American Law Institute's Restatements and the UNIDROIT Principles of International Commercial Contracts academic codifications have come to be seen as legally authoritative, and their norms applied as such in courts and other contexts.

How have such texts acquired legal authority? Does their authority undermine the orthodox accounts of the nature of legal systems? Drawing on examples from Roman law to the present day, this book offers the first comparative analysis of non-legislative codifications. It offers a provocative contribution to the debates surrounding the harmonisation of European private law, and the growth of international law.

-Offers the first extended study of the process by which non-legislative codifications are recognized as binding by legal authorities
-Uses the methodology of comparative law and legal history
-Draws on historical and modern examples of non-legislative codifications, including Justinian's Institutes, Blackstone's Commentaries, the Draft Common Frame of Reference and the American Law Institute's Restatements
-Reproductions of the primary texts allows for comparison of the visual aspects of legal texts


Professor Dr Nils Jansen currently serves of the Law Faculty at the University of Munster, Germany. He holds the Chair for Roman Law, Legal History, German and European Private Law, and is a Principal Investigator in the Cluster of Excellence Religion and Politics in the Cultures of Pre-Modernity and Modernity. He is the author of several books in German, and co-edited Beyond the State. Rethinking Private Law with Ralf Michaels.