BOOK: "Balance of Power and Norm Hierarchy. Franco-British Diplomacy after the Peace of Utrecht" by F. Dhondt 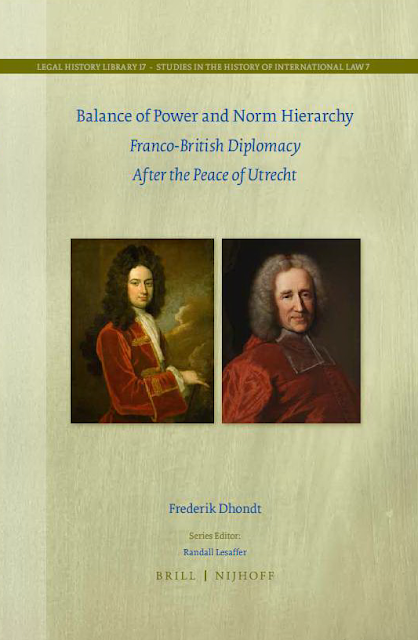 Frederik Dhondt, Ghent University
Balance of Power and Norm Hierarchy: Franco-British Diplomacy after the Peace of Utrechtoffers a detailed study of French and British diplomacy in the age of ‘Walpole and Fleury’. After Louis XIV’s decease, European international relations were dominated by the collaboration between James Stanhope and Guillaume Dubois. Their alliance focused on the amendment and enlargement of the peace treaties of Utrecht, Rastatt and Baden. In-depth analysis of vast archival material uncovers the practical legal arguments used between Hampton Court and Versailles. ‘Balance of Power’ or ‘Tranquillity of Europe’ were in fact metaphors for the predominance of treaty law even over the most fundamental municipal norms. An implacable logic of norm hierarchy allowed to consolidate peace in Europe.

Posted by Unknown at 5:58 PM No comments:

Email ThisBlogThis!Share to TwitterShare to FacebookShare to Pinterest
Labels: Balance and Power and Norm Hierarchy, Book

Posted by Unknown at 5:45 PM No comments:


Historian Ramses Delafontaine presents an engaging examination of a controversial legal practice: the historian as an expert judicial witness. This book focuses on tobacco litigation in the U.S. wherein 50 historians have witnessed in 314 court cases from 1986 to 2014. The author examines the use of historical arguments in court and investigates how a legal context influences historical narratives and discourse in forensic history. Delafontaine asserts that the courtroom is a performative and fact-making theatre. Nonetheless, he argues that the civic responsibility of the historian should not end at the threshold of the courtroom where history and truth hang in the balance.
The book is divided into three parts featuring an impressive range of European and American case studies. The first part provides a theoretical framework on the issues which arise when history and law interact. The second part gives a comparative overview of European and American examples of forensic history. This part also reviews U.S. legal rules and case law on expert evidence, as well as extralegal challenges historians face as experts. The third part covers a series of tobacco-related trials. With remunerations as high as hundreds of thousands of dollars and no peer-reviewed publications or communication on the part of the historians hired by the tobacco companies the question arises whether some historians are willing to trade their reputation and that of their university for the benefit of an interested party. The book further provides 50 expert profiles of the historians active in tobacco litigation, lists detailing the manner of the expert’s involvement, and West Law references to these cases.
This book offers profound and thought-provoking insights on the post-war forensification of history from an interdisciplinary perspective. In this way, Delafontaine makes a stirring call for debate on the contemporary engagement of historians as expert judicial witnesses in U.S. tobacco litigation. Edward Elgar announced the publication of Economics Of Legal History, edited by Daniel Klerman (University of South Carolina). The volume collects a series of articles on law and economics and legal history.

PART I LAW AS DEPENDENT VARIABLE: EFFICIENCY AND BEYOND

2. Zeynep K. Hansen and Gary D. Libecap (2004), ‘The Allocation of Property Rights to Land: US Land Policy and Farm Failure in the Northern Great Plains’, Explorations in Economic History, 41 (2), April, 103–29

11. Dan Bogart (2011), ‘Did the Glorious Revolution Contribute to the Transport Revolution? Evidence from Investment in Roads and Rivers’, Economic History Review, 64 (4), November, 1073–112

Posted by Frederik Dhondt at 9:30 AM No comments:


New York University Paris and Sciences Po Paris (CEVIPOF) organize a conference on the nature of the French and American Republics.


While France and America are often considered “sister republics”, the respective particularity of the historical experiences of these two nations has given rise to seemingly incompatible notions of freedom and liberty, rights and responsibilities, and attitudes towards sexual, racial, and religious difference. In addition, both France and America continue to grapple with the “dark spots” of their pasts (slavery, colonialism) while straining to adapt to the calls for greater pluralism precipitated by decolonization, transnationalism, and major social movements of the 20th century. The purpose of this conference is to interrogate how equality is conceived and practiced in each of these policies. It seeks to illuminate the points of correspondence and discord between the epistemological and political foundations that inform both American liberalism and French republicanism. In advancing an interdisciplinary methodology, the conference aspires to explore how identity, gender, and social hierarchy are coded by these conceptions of the equal and whether and how such conceptions paradoxically re-entrench forms of vulnerability and exclusion.

Source: Calenda.
Posted by Frederik Dhondt at 9:20 AM No comments:

CONFERENCE: The Democratic State in Trans-Atlantic Context (University of Chicago in Paris, 20-21 May 2015) 
The University of Chicago Center in Paris held an interesting conference on "The Democratic State in Trans-Atlantic Context" (20-21 May 2015).


Scholarship on the state has been oddly parochial, focused on the domestic and national scales to the exclusion of the international and transnational.  This habit of presuming the nation-state as a bounded container is particularly entrenched in work on the state, understood in Weberian terms that are conceptually insulated from democratic practices.  Democracy, in turn, is often taken as an already defined category of regime rather than a quality of political action as it plays out in state-building.  By taking both democracy and the nation-state for granted, scholars leave unspecified what should be empirically explained.  Even comparative analyses of welfare states, which should be more cosmopolitan, tend to reify national differences by naturalizing the comparative framework rather than by historicizing the mutual constitution of systems of social provision. Recent work by historically-inclined social theorists and students of political economy – including Michel Foucault, Pierre Rosanvallon, Thomas Piketty, to name only a few -- provides scholars of the democratic state with exciting new interpretive questions and tools. During this conference, we hope to advance a transnational conversation with scholars from the U.S. and Europe to interrogate the development of the democratic state in trans-Atlantic context.

Rethinking the State in Trans-Atlantic Context , 9-11:15

Conversation on Weber and the State, 4-5

Conversation: How Globalization Made States? Public Authority, Private Capital, and Local Networks in the Nineteenth Century

Moderator: William Novak
For more information on the State as History and Theory Project see:
http://neubauercollegium.uchicago.edu/faculty/state_as_history_and_theory/


Source: calenda.
Posted by Frederik Dhondt at 9:14 AM No comments:

The University of Paris South and Sciences Po Law School presented their research project on legislation during the Directory on Nomôdos.7

Posted by Frederik Dhondt at 8:59 AM No comments: Calenda announced an interdisciplinary workshop on the legal history of the Ottoman Empire, held in Paris on 26 and 27 May.

Posted by Frederik Dhondt at 8:54 AM No comments: Nomôdos reports the publication of a recent issue of Ratio Juris, with a section dedicated to Macchiavelli.

Posted by Frederik Dhondt at 8:48 AM No comments: 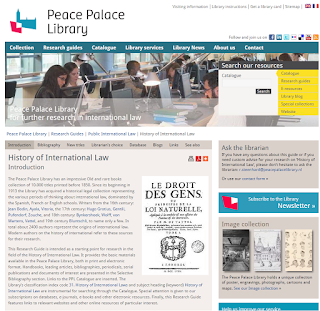 The excellent website of the Peace Palace Library highlights its research guide on the history of international law.

More information here.
Posted by Frederik Dhondt at 8:40 AM No comments:

Researching Chinese Legal History in Europe: The State of the Field

Date: 4 June 2015Time: 10:00 AM
Finishes: 5 June 2015Time: 1:00 PM
Venue: Russell Square: College BuildingsRoom: G3
Type of Event: Workshop
Series: Law and Justice in China Workshop Series
For centuries, scholars based in Europe have examined China’s past in an attempt to understand the various processes influencing the development and evolution of Chinese legal tradition(s). This line of research continues in Europe today, yet given the diversity of institutions and disciplines in which researchers work, as well as the field-specific publications in which they publish, the current state of the field of Chinese legal studies in Europe remains under specified.  What questions are scholars seeking to answer?  Which methods and theories are being employed to examine historical phenomena in China’s legal past?  What source material is available for scholars and students, and at which institutions?  What is the future of Chinese legal history in Europe?  This workshop seeks to answer some of these questions by bringing together several scholars from various European institutions, who are actively engaged in the study of China’s legal past.  Through presentations of current work and roundtable discussions, we hope to establish a community of scholars actively engaging China’s legal past, and also to map out future avenues of research and multi-institutional collaboration.

The event is free and open to the public.  Registration is required.Online Registration
Organiser: Co-organised by the SOAS China Institute and SOAS School of Law
Contact email: sci@soas.ac.uk
Contact Tel: