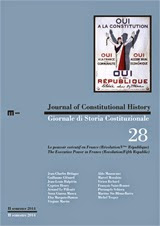 Rethinking constitutionalism in the global era, Call for papers

What are we talking about when today we speak of «constitutionalism»? This is the key-question which surfaces – in a more or less explicit way – from the contemporary debate on the theme. Like all the words which underwent a process of re-semanticisation, the notion of «constitutionalism», as well, has experienced an impressing variety of semantic characterisations during the last years, ending up in many occasions by assuming such a wide meaning that it appears little more than metaphorical to whoever is minimally aware of the traditional history of the concept. It is also for this reason that, in order to celebrate its fifteenth year of activity, the «Journal of Constitutional History» (www.storiacostituzionale.it) decided to dedicate the first issue of 2016 to the future of constitutionalism, inviting all the scholars, who during the last years from different perspectives measured themselves against the demanding epistemic and categorial issues linked to the use of this concept within the changed political-juridical context of the «global era», to take part in it. The editors of the periodical hope that an open and straightforward debate between different investigation perspectives will be able to clarify the actual meaning that today can still be assigned to that peculiar normative perspective which for many authors is at the core of the «paradigma del costituzionalismo moderno, inteso come scienza di fondazione e di limitazione del potere legittimo» (paradigm of modern constitutionalism, intended as science of foundation and limitation of legitimate power). For this reason we ask all the scholars interested in the theme to contribute to this common effort of reflection and conceptual problematisation sending by the 31st July 2015 an article proposal (possibly in English) including title and a short abstract which summarises the topic they would like to deal with, to Dr. Antonella Bettoni, antonella.bettoni@unimc.it.

As highlighted by many, during the last two decades the «language of constitutionalism» is enjoying again widespread circulation and influence within the tense debate concerning the new juridical and political order of global society. At the base of this phenomenon, there surely is the sense of “disorientation” produced, also at a theoretical level, by the strong and turbulent juridical-political processes which followed the crisis of the world bipolar order. When one is forced to move in non familiar areas, the attempt to re-orientate oneself by way of using category maps that one already has, becomes natural: in situations of this kind, «Working with analogies, extending and adapting existing concepts, seems usually preferable to the creation of ideas and structures from scratch, not only because of the risks involved in the latter, but also because of our limits of imagination». As the protagonists of the great workshop of modern political thought, contemporary political and juridical theory would, therefore, be committed to a strenuous effort of redefinition and adaptation of the consolidated vocabulary of politics inherited from the past. The return of constitutionalism and of its categorial language would be integral and substantial part of this effort of theoretical and conceptual re-foundation.