REVIEW: "From Comparing to Comparative Law", by Dmitry Poldnikov (Paris, May 7 2015) 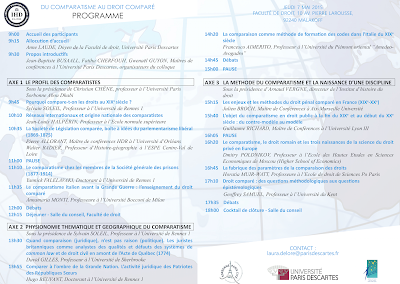 On May 7, 2015 the faculty of law of the University Paris Descartes (Paris V) organized a one-day Colloquium on the origins of comparative methodology in legal science in the 19th and the 20th centuries. The event attracted over thirty participants, including thirteen speakers, from different countries (mostly from France, but also from Italy, England, Canada and Russia).
The intense proceedings the Colloquium were arranged in three successive panels, addressing 1) the profiles of the prominent comparatists, 2) the range of topics and geographical extent of the comparative studies, and 3) the methodological foundations of the discipline.
The main ideas of the Colloquium were distilled by the key speakers. Sylvain Soleil (University of Rennes 1) highlighted the many facettes of comparing laws in the 19th century. He talked about describing, illustrating, bring in new data, understanding, criticizing, imitating, practicing, unifying, developing theories, and teaching law students.
Jean-Louis Halpérin (l’Ecole normale supèrieure) presented the results of his research in the international networks of comparatists with headquarters in France and Germany. He outlined the rise of such networks in the time between the two World Wars and their decay and fragility due to the political trubles.
While other participants of the Colloquium offered more evidence of comparative activities of jurists in the domains of constitutional, criminal, civil law, two last speakers ventured out into the future of the discipline.
Horatia Muis-Watt (l’Ecole de droit de Sciences Po Paris) shared her doubts about the truly scientific character of comparative law (as contested by Zweigert and Kötz). Acknowledging the value of comparing legal institutes, the speaker called for a broader subject of comparison (embracing all elements of legal culture). That would inevitably lead to interdisciplinary cooperation, comparing the dynamics of legal cultures, and taking into account the subjective perception of foreign legal phenomena.


In a similar vein Geoffrey Samuel (University of Kent) criticized the shortcomings of the comparative law of the 20th century and argued in favour of a new comparatisme (advocated by Whitman, Riles, Lasser, Legrand). It should opt for structural approach in place of functionalism, presumption of difference instead of praesumptio similitudinis, the paradigm of inquiry instead of that of authority.
The presentations as well as the following debates during the Colloquium made it clear that comparative activities of the previous generations of jurists turned out to be a vibrant field of research. Hopefully, more exciting studies are to come and there will be another occasions to present and discuss them at the welcoming Paris Descartes.
As a participant in the Colloquium I’d like to address my special thanks to the the organisers: Jean-Baptiste Busaall, Fatiha Cherfouh, and Gwenaël Guyon. for their great efforts.