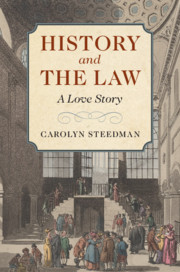 Cambridge University Press is publishing a new book on everyday legal encounters with the law in English law between the 18th-20th century.

Focusing on everyday legal experiences, from that of magistrates, novelists and political philosophers, to maidservants, pauper men and women, down-at-heel attorneys and middling-sort wives in their coverture, History and the Law reveals how people thought about, used, manipulated and resisted the law between the eighteenth and the twentieth centuries. Supported by clear, engaging examples taken from the historical record, and from the writing of historians including Laurence Sterne, William Godwin, and E. P. Thompson, who each had troubled love affairs with the law, Carolyn Steedman puts the emphasis on English poor laws, copyright law, and laws regarding women. Evocatively written and highly original, History and the Law accounts for historians' strange ambivalent love affair with the law and with legal records that appear to promise access to so many lives in the past.

Carolyn Steedman is Emeritus Professor of History at the University of Warwick. Her previous books include Landscape for a Good Woman (1986), Dust (2001), Master and Servant (Cambridge, 2007), Labours Lost (Cambridge, 2009), An Everyday Life of the English Working Class (Cambridge, 2013) and Poetry for Historians (2018).

A beginning: 'history' Stephen Dunn
1. Its ziggy shape
2. Law troubles: two historians and some threatening letters
3. Letters of the law: everyday uses of the law at the turn of the English nineteenth-century
4. The worst of it: Blackstone and women
5. Who owns Maria
6. Sisters in laws
7. Hating the law: Caleb Williams
8. The kind of law a historian loved
An ending: not a story
Bibliography
Index.