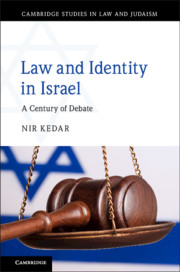 Cambridge University Press has published a book on law and identity in Israel.

What makes Israeli law Israeli? Why is the word 'Jewish' almost entirely absent from Israeli legislation? How did Israel succeed in eluding a futile and dangerous debate over identity, and construct a progressive, independent, original and sophisticated legal system? Law and Identity in Israel attempts to answer these questions by looking at the complex bond between Zionism and the Jewish culture. Forging an original and 'authentic' Israeli law that would be an expression and encapsulation of Israeli-Jewish identity has been the goal of many Jewish and Zionist jurists as well as public leaders for the past century. This book chronicles and analyzes these efforts, and in the process tackles the complex meaning of Judaism in modern times as a religion, a culture, and a nationality. Nir Kedar examines the challenges and difficulties of expressing Judaism, or transplanting it into, the laws of the state of Israel.

Nir Kedar is a Professor of law and history at Bar Ilan University, Israel and the Vice President for Academic Affairs of Sapir College in Israel. His main fields of interest are modern legal history, legal and political theory and comparative law. He has published five books and numerous articles including, Mamlakhtiyut: David Ben-Gurion's Civic Thought (Hebrew) (2009), which won the 2009 Shapiro Prize for Best Book on Israel.

Introduction: law as an expression of Jewish culture
Part I. Seeking to Fashion National Law:
1. Law and culture in early Zionist literature
2. The Hebrew peace courts: the Yishuv judicial system that failed
3. The Hebrew law society: an abortive attempt to fashion a Jewish-Hebrew national code of law
4. Why a Jewish-Hebrew system of law was not instituted at independence
5. A Hebrew constitution for the Jewish state: how did the cultural dispute prevent the promulgation of a written constitution
6. Jewish law and legislation in Israel
Part II. The Resurgence of Cultural Conflict:
7. Jewish heritage and a Jewish democratic state: the identity discourse returns to the legal debate
8. The identity turn and the Jewish and democratic state
Part III. Zionism, Democracy, Law, and Culture:
9. Zionism: making and preserving Hebrew culture
10. Israeli law as a lieu de mémoire of national identity and culture
Conclusion: list of legal cases.