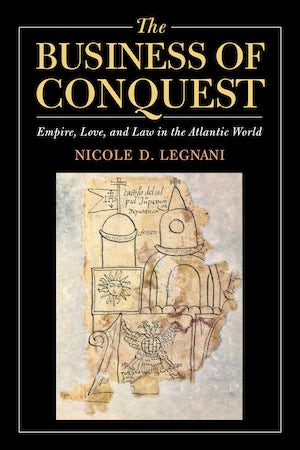 The University of Notre Dame Press is publishing “The Business of Conquest - Empire, Love, and Law in the Atlantic World”.

The Spanish conquest has long been a source of polemic, ever since the early sixteenth century when Spanish jurists began theorizing the legal merits behind native dispossession in the Americas. But in The Business of Conquest: Empire, Love, and Law in the Atlantic World, Nicole D. Legnani demonstrates how the financing and partnerships behind early expeditions betray their own praxis of imperial power as a business, even as the laws of the Indies were being written. She interrogates how and why apologists of Spanish Christian empire, such as José de Acosta, found themselves justifying the Spanish conquest as little more than a joint venture between crown and church that relied on violent actors in pursuit of material profits but that nonetheless served to propagate Christianity in overseas territories. Focusing on cultural and economic factors at play, and examining not only the chroniclers of the era but also laws, contracts, theological treatises, histories, and chivalric fiction, Legnani traces the relationship between capital investment, monarchical power, and imperial scalability in the Conquest. In particular, she shows how the Christian virtue of caritas (love and charity of neighbor, and thus God) became confused with cupiditas (greed and lust), because love came to be understood as a form of wealth in the partnership between the crown and the church. In this partnership, the work of the conquistador became, ultimately, that of a traveling business agent for the Spanish empire whose excess from one venture capitalized the next. This business was thus the business of conquest and featured entrepreneurial violence as its norm—not exception.

The Business of Conquest offers an original examination of this period, including the perspectives of both the creators of the colonial world (monarchs, venture capitalists, conquerors, and officials), of religious figures (such as Las Casas), and finally of indigenous points of view to show how a venture capital model can be used to analyze the partnership between crown and church. It will appeal to students and scholars of the early modern period, Latin American colonial studies, capitalism, history, and indigenous studies.

Nicole D. Legnani is assistant professor of Spanish and Portuguese at Princeton University. She is the translator of Titu Cusi: A 16th-Century Account of the Conquest.