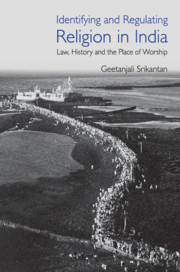 Judicial debates on the regulation of religion in post-colonial India have been characterised by the inability of courts to identify religion as a governable phenomenon. This book investigates the identification and regulation of religion through an intellectual history of law's creation of religion from the colonial to the post-colonial. Moving beyond conventional explanations on the failure of secularism and the secular state, it argues that the impasse in the legal regulation of religion lies in the methodologies and frameworks used by British colonial administrators in identifying and governing religion. Drawing on insights from post-colonial theory and religious studies, it demonstrates the role of secular legal reasoning in the background of Western intellectual history and Christian theology through an illustration of the place of worship. It is a contribution to South Asian legal history and sociolegal studies analysing court archives, colonial narratives and legislative documents.

Geetanjali Srikantan teaches global legal history in the Department of Public Law and Governance, Tilburg Law School at Tilburg University. She holds law degrees from the National Law School of India, Bangalore and the University of Warwick, UK.

More information and table of contents with the publisher.

Posted by Stefano Cattelan at 9:30 AM