BOOK: "Reinventing Punishment. A Comparative History of Criminology and Penology in the Nineteenth and Twentieth Centuries" by Michele Pifferi (June, 2016) 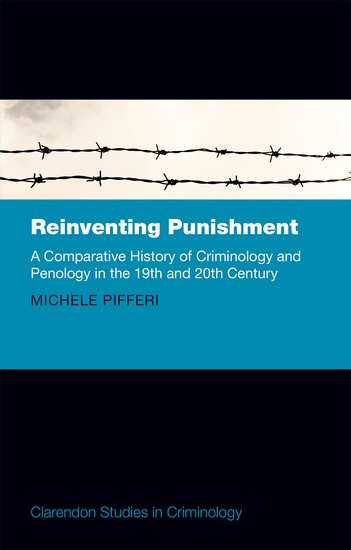 Reinventing Punishment. A Comparative History of Criminology and Penology in the Nineteenth and Twentieth Centuries, by Michele Pifferi

Michele Pifferi is Associate Professor of Legal History at the Law Department, University of Ferrara, where he teaches Medieval and Modern Law History and Criminal Law History. He has been visiting researcher at the Max Planck Institute for European Legal History in Frankfurt am Main (2002); Emil Noël Fellow at the Jean Monnet Center for International & Regional Economic Law and Justice, NYU School of Law (2009); Robbins Fellow at Berkeley UC, School of Law (2012); Academic Visitor at the Oxford Centre for Criminology (2014); and is currently Alexander von Humboldt Research Fellow at the University of Hamburg. His research interests focus on comparative history of criminal law and criminology and migration history.

1: Introduction
2: Designing the 'New Horizons' of Punishment
3: The Origins of Different Penological Identities
4: The Struggle over the Indeterminacy of Punishment in the USE (1870s-1900s)
5: The Concept of Indeterminate Sentence in the European Criminal Law Doctrine
6: The Formation of the European Dual-Track System
7: The 'New Penology' as a Constitutional Matter: The Crisis of Legality in the Rule of Law and the Rechtsstaat (1900s-1930s)
8: Nulla poena sine lege and the Sentencing Discretion
9: From Repression to Prevention: The Uncertain Borders between Jurisdiction and Administration
10: The Constitutional Conundrum of the Limits to Preventive Detention
11: Conclusions
Posted by Unknown at 10:15 AM