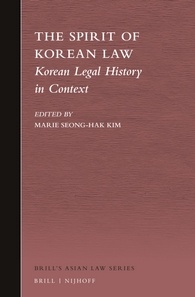 This is the first book on Korean legal history in English written by a group of leading scholars from around the world. The chapters set forth the developments of Korean law from the Chosŏn to colonial and modern periods through the examination of codified laws, legal theories and practices, and jurisprudence. The contributors’ shared premise is that the evolution of Korean law can be best understood when viewed in terms of its interactions with outside laws. Each chapter integrates literature in Korean, Japanese, Chinese, and Western languages into comprehensive analyses to make up-to-date research available to readers both inside and outside Korea. This volume provides a solid framework from which to approach Korean legal history in the perspective of comparative legal traditions.

Biographical note
Marie Seong-Hak Kim (J.D. 1994; Ph.D. 1991) is Professor of History at St. Cloud State University. She is the author of Law and Custom in Korea: Comparative Legal History (2012) and Michel de L’Hôpital: The Vision of a Reformist Chancellor during the French Religious Wars (1997).

Part 1 Legal Codes and Institutions of the Chosŏn Dynasty

Circulation of Law and Jurisprudence in Korea and China: Homicide and the Notion of Requital for Life
Frédéric Constant

Part 2 Law and the Legal System under Colonial Rule