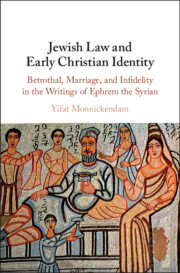 Ephrem, one of the earliest Syriac Christian writers, lived on the eastern outskirts of the Roman Empire during the fourth century. Although he wrote polemical works against Jews and pagans, and identified with post-Nicene Christianity, his writings are also replete with parallels with Jewish traditions and he is the leading figure in an ongoing debate about the Jewish character of Syriac Christianity. This book focuses on early ideas about betrothal, marriage, and sexual relations, including their theological and legal implications, and positions Ephrem at a precise intersection between his Semitic origin and his Christian commitment. Alongside his adoption of customs and legal stances drawn from his Greco-Roman and Christian surroundings, Ephrem sometimes reveals unique legal concepts which are closer to early Palestinian, sectarian positions than to the Roman or Jewish worlds. The book therefore explains naturalistic legal thought in Christian literature and sheds light on the rise of Syriac Christianity.

Yifat Monnickendam is a senior lecturer in the Department of Jewish History at Tel Aviv University. Her work focuses on the rise of the Christian legal tradition in its Roman and Jewish context and she has published widely in leading journals.