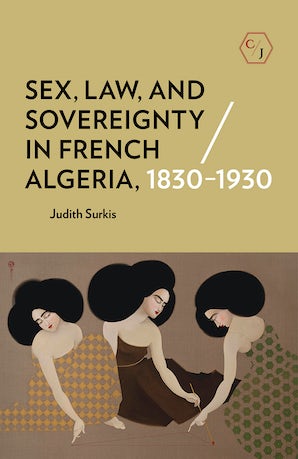 Cornell University Press has published a new book on sex, law and sovereignty in French Algeria.

During more than a century of colonial rule over Algeria, the French state shaped and reshaped the meaning and practice of Muslim law by regulating it and circumscribing it to the domain of family law, while applying the French Civil Code to appropriate the property of Algerians. In Sex, Law, and Sovereignty in French Algeria, 1830–1930, Judith Surkis traces how colonial authorities constructed Muslim legal difference and used it to deny Algerian Muslims full citizenship. In disconnecting Muslim law from property rights, French officials increasingly attached it to the bodies, beliefs, and personhood.

Surkis argues that powerful affective attachments to the intimate life of the family and fantasies about Algerian women and the sexual prerogatives of Muslim men, supposedly codified in the practices of polygamy and child marriage, shaped French theories and regulatory practices of Muslim law in fundamental and lasting ways. Women's legal status in particular came to represent the dense relationship between sex and sovereignty in the colony. This book also highlights the ways in which Algerians interacted with and responded to colonial law. Ultimately, this sweeping legal genealogy of French Algeria elucidates how "the Muslim question" in France became—and remains—a question of sex.

Judith Surkis is Associate Professor of History at Rutgers University, New Brunswick. She is author of Sexing the Citizen.