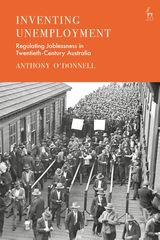 Bloomsbury is publishing a new book on the regulation of joblessness in 20th century Australia.

This book examines the evolution of Australian unemployment law and policy across the past 100 years. It poses the question 'How does unemployment happen?' But it poses it in a particular way. How do we regulate work relationships, gather statistics, and administer a social welfare system so as to produce something we call 'unemployment'? And how has that changed over time?

Attempts to sort workers into discrete categories – the 'employed', the 'unemployed', those 'not in the labour force' – are fraught, and do not always easily correspond with people's working lives. Across the first decades of the twentieth century, trade unionists, statisticians and advocates of social insurance in Australia as well as Britain grappled with the problem of what forms of joblessness should be classified as 'unemployment'. This book traces those debates. It also chronicles the emergence and consolidation of a specific idea of unemployment in Australia after the Second World War. It then charts the eventual unravelling of that idea, and relates that unravelling to the changing ways of ordering employment relationships.

In doing so, Inventing Unemployment challenges the preconception that casual work, self-employment, and the 'gig economy' are recent phenomena. Those forms of work confounded earlier attempts to define 'unemployment' and are again unsettling our contemporary understandings of joblessness.

This thought-provoking book shows that the category of 'unemployment', rather than being a taken-for-granted economic variable, has its own history, and that history is intimately related to our changing understandings of 'employment'.