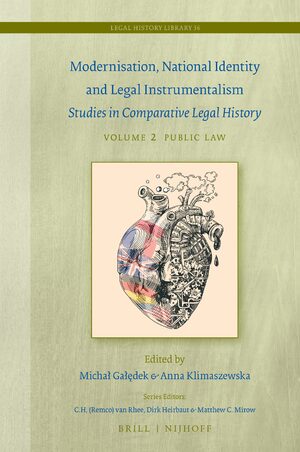 Brill is publishing a two-volume work on modernization of the law over the past few centuries, nationality identity and legal instrumentalism.

Michał Gałędek Ph.D. (2010), University of Gdańsk, is Professor in the Department of Legal History, Faculty of Law and Administration. In his research he focuses on the Polish administration, judiciary, constitutionalism, and political thought at the beginning of the 19th century and in the interwar period.

Anna Klimaszewska Ph.D. (2011), University of Gdańsk, is Assistant Professor in the Department of Legal History, Faculty of Law and Administration. In her research she focuses on the influence exerted by the French law on the shape of the Polish legal system, commercial law, civil procedure and national legal identity in the 19th century.

3 Revolution and the Instrumentality of Law: Theories of Property in the American and French Revolutions
Bart Wauters

8 The Contractual Third-Party Notion: Beyond the Principle of the Relativity of Contracts: The Comparative Legal History as Methodological Approach
Sara Pilloni

9 Civilian Arguments in the House of Lords’ Judgments: Regarding Delictual (Tortious) Liability in 20th and 21st Century
Łukasz Jan Korporowicz

11 In the Name of the Republic: Family Reform in Late Nineteenth and Early Twentieth-Century France and China
Mingzhe Zhu

12 The Private Law Codification as an Instrument for the Consolidation of a Nation from Inside: Estonia and Latvia between two World Wars
Marju Luts-Sootak, Hesi Siimets-Gross, Katrin Kiirend-Pruuli

2 Legal Transfers and National Traditions: Patterns of Modernization of the Administration in Polish Territories at the Turn of the 19th Century
Michał Gałędek

3 National Modernization through the Constitutional Revolution of 1848 in Hungary: Pretext and Context
Imre Képessy

7 Political Systems in Transition and Cultural (In)dependence: The Limits of a Legal Transplant in the Example of the Brazilian’s Court of Auditors Birth
Marjorie Carvalho de Souza

9 Local Citizenship in the Croatian-Slavonian Legal Area in the First Yugoslavia (1918–1941): Breakdown of a Concept?
Ivan Kosnica