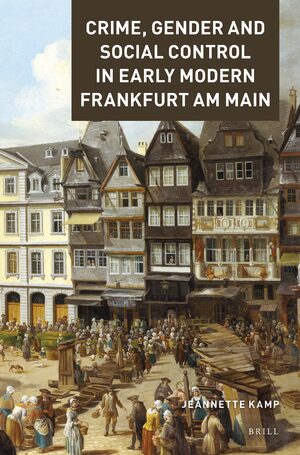 Brill is publishing a new book on crime, gender and social control in Early Modern Frankfurt am Main.

This book charts the lives of (suspected) thieves, illegitimate mothers and vagrants in early modern Frankfurt. The book highlights the gender differences in recorded criminality and the way that they were shaped by the local context. Women played a prominent role in recorded crime in this period, and could even make up half of all defendants in specific European cities. At the same time, there were also large regional differences. Women’s crime patterns in Frankfurt were both similar and different to those of other cities. Informal control within the household played a significant role and influenced the prosecution patterns of authorities. This impacted men and women differently, and created clear distinctions within the system between settled locals and unsettled migrants.

Jeannette Kamp, Ph.D. (1986), is a postdoctoral fellow at the University of Oxford. She has previously published an edited volume with Matthias van Rossum Desertion in the Early Modern World (2016).