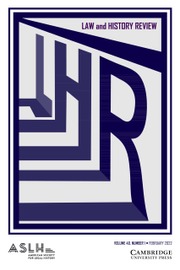 This article examines the East India Company's Bengal Regulation 10 of 1804, a legal statute that enabled martial law to be enforced by the in British colonial India. The use made of this little studied yet significant emergency regulation, its perceived legal deficiencies, and in particular, the discord that arose between the military and civil authorities over how and who should be administer it will be discussed with reference to the promulgation of martial law by the British during the Cuttack Uprising of 1857, the Indian “Mutiny” or Revolt of 1857, and in response to the civil unrest in the Punjab during 1919. While martial law was itself ring fenced by legislation that determined the legal grounds for its inauguration and for its cessation, the implementation of martial law by the British military forces in India was marked by the absence of law.

The Requerimiento in the Old World: Making Demands and Keeping Records in the Legal Culture of Late Medieval Castile (Yanay Israeli) / OPEN ACCESS

This article analyses the place of the legal procedure known as requerimiento (requirement) in the social life of late medieval Castile. Drawing on archival sources from the fourteenth and fifteenth centuries, it examines how Castilians deployed the requerimiento and what meanings and functions this procedure assumed, particularly in processes of conflict-management. While much has been written about the requerimiento as a ritual of conquest in Spanish America, the place of this procedure in the legal culture of late medieval Castile has received little scholarly attention. By examining how the requerimiento operated within the world of civic disputes in Castilian villages and towns, this study brings to light a rather unknown background for the more familiar requerimiento, the colonial ritual of the sixteenth century.

A New Foundation for Freedom of Movement in an Age of Sovereign Control: The Liberal Jurisprudence of August Wilhelm Heffter (Christopher Szabla)

This article addresses how a once influential but now obscure jurist addressed a potential paradox in liberal thought—between democratic control over borders and transnational rights—as it arose in the mid-nineteenth-century, amid advocacy against authoritarianism and for free trade and movement, on the one hand, and the increasing calling into question of natural law theories that may have best facilitated free movement, on the other. While scholarship has increasingly shown how the boundaries between periods of natural law and positivist hegemony are difficult to distinguish, specific tensions in the mid-nineteenth-century called for an approach that preserved free movement in light of the growing appeal of empiricism and state sovereignty. In this context, August Wilhelm Heffter proposed that states were bound by higher law as a consequence of their free decision to enter international communities: these communities’ purpose, he wrote, bred customary laws facilitating interstate interaction. Heffter’s approximation of “natural” law in a more positivist context and his use of the period’s “customary” logic helps account for his influence not only in periods of free trade and movement’s ascendancy but also the survival of forms of his thought into periods of sovereigntist reaction against them. It therefore holds potential to address what scholarship has termed today’s “liberal paradox” between democracy and migration better than approaches that emphasize a more complete return to natural law.

This is a critical historiographical essay animated by the research question of how the decisions of police and sheriffs illuminated and drove the transformation of white supremacy through different forms from emancipation to the end of Jim Crow segregation. It situates this focus amidst current methodological trends that stress structural oppression and argues that law-enforcers’ agency could illuminate discussions among historians and other scholars about the relationship between formal and informal law alongside the rise of the modern criminological state. The historical importance of enforcers is accentuated in the story told in each section—the shifting demographics of enforcement during Reconstruction; the inequalities of policing alongside lynching in the last decades of the nineteenth century; the complex interplay between policing and segregation statutes, colorblind criminal law, and mob violence in the Jim Crow South; the concurrent modernization of racialized policing nationwide; and the displacement of informal mob law and formal racial caste by a national regime of extralegal police violence, unequal patterns of incarceration and execution, and federal protections of civil liberties and civil rights.

This article reprises the Plenary Lecture from the American Society for Legal History Annual Meeting in New Orleans, Louisiana, in November, 2021. Witt presents the story of cases that are quintessential examples of the kind of broken success that law makes available and that legal history helps us see. In other words, these cases make visible that the at-best-tragic realization of ideals is built into the mechanisms of the law.

Hanging Matters: Petty Theft, Sentence of Death, and a Lost Statute of Edward I (Henry Summerson)

This article discusses an important aspect of the law relating to theft in thirteenth-century England, and one of the ways in which that law developed. Central to it is the argument that the treatise The Mirror of Justices and references in court records and reports show that a short statute enacted early in the reign of Edward I, probably in 1278, categorically defined 12d. as the amount, whether in goods or money, at which larceny became a capital felony, incurring judgment of death. As well as setting out the evidence for this hitherto overlooked ordinance, the article also argues that the statute can be associated with some significant developments in the way petty theft was treated subsequently. In particular it had the effect of promoting the development of penal imprisonment, while since the task of valuation was given to trial juries, it further enhanced the leading role of the latter in determining the fates of the men and women whose lives depended on their verdicts.

BOOK REVIEWS
More information can be found here.
Posted by Marco Castelli at 8:30 AM