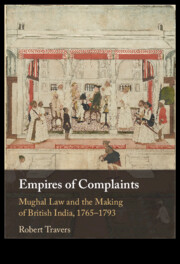 In this deeply researched and revealing account, Robert Travers offers a new view of the transition from Mughal to British rule in India. By focusing on processes of petitioning and judicial inquiry, Travers argues that the East India Company consolidated its territorial power in the conquered province of Bengal by co-opting and transforming late Mughal, Persianate practices of administering justice to petitioning subjects. Recasting the origins of the pivotal 'Permanent Settlement' of the Bengal revenues in 1793, Travers explores the gradual production of a new system of colonial taxation and civil law through the selective adaptation and reworking of Mughal norms and precedents. Drawing on English and Persian sources, Empires of Complaints reimagines the origins of British India by foregrounding the late Mughal context for colonial state-formation, and the ways that British rulers reinterpreted and reconstituted Persianate forms of statecraft to suit their new empire.

1. Petitioning, taxation and law in eighteenth century Bengal: the context for empire

4. 'At the Durbar' in Calcutta: Banians, revenue farming, and the politics of landed debt

5. A jagirdar's lament: an Indo-Persian historian's appeal to the British empire

Robert Travers is Associate Professor of History at Cornell University.

Posted by Priyasha Saksena at 9:00 AM