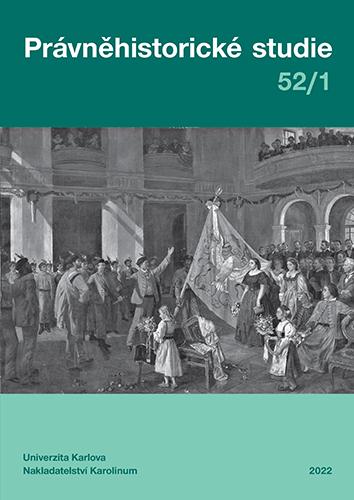 This article addresses the question of whether and how the Lutheran Reformation led to a (further) pluralisation of legal systems. Since the beginning of the early modern period, primarily in the course of the 16th century, a wave of legal records and legal codifications can be observed throughout Europe. The connection with the reception of Roman and Canon law is obvious. On a completely different level, an epochal church schism took place from the early 16th century onwards, triggered by Martin Luther’s (1483–1546) fundamental criticism of the Roman Church. The term “pluralism of legal systems” is used here in the sense of diversity as well as the accepted coexistence and togetherness of cultural phenomena in the field of law. The article is divided into three sections: In the first section, an overview of legislation, primarily in the Holy Roman Empire, from about 1517 to the end of the 16th century will be given. Among the many examples will be the famous Czech city law codification of Pavel Koldin, which was newly edited and annotated a few years ago. A second section will deal with those legal norms that are related to the Lutheran Reformation and can be seen as consequences of the Reformation. In a third section, some substantive innovations that have had an impact up to the current legal system will be presented. The conclusion will be a short summary and some further observations.

Gábor Hollósi, Hungarian System for the Nomination of Parliamentary Candidates between the Two Wars in the European Context (https://doi.org/10.14712/2464689X.2022.6)

The institution of the nomination of parliamentary candidates was already well known in most European electoral systems between the two wars. Its purpose can be briefly summarized as meaning that the voters can only cast their votes for a person who has previously been nominated as a parliamentary candidate under the conditions specified by law. Within the European field, the contemporary Hungarian nomination system is characterized by its extraordinary intricacy, and the high number of abuses naturally follows from its complexity. However, in our study we do not deal with these abuses but describe the Hungarian rules and regulations while constantly researching its European aspects. Accordingly, we divided our work into three units. First of all, we classify the continent’s nomination systems in order to show where the place of the Hungarian rules and regulations between the two wars were. Thereafter, we review the development of the Hungarian rules based on the Electoral Decree of 1922, the (First) Electoral Act of 1925, the so-called “Nomination” Amendment Act of 1937 and the (Second) Electoral Act of 1938. Finally, using the Explanatory Memorandums to the mentioned acts and the discussion materials of the National Assembly/Parliament, we look for the European (comparative) examples that emerged during their creation. Our study will also show what the Explanatory Memorandums to the acts (which reflect the pro-government standpoint) or the parliamentary opposition considered worth highlighting from the nomination systems of foreign countries.

For the contents of the earlier volumes of this journal see this page.

Posted by Piotr Alexandrowicz at 9:00 AM