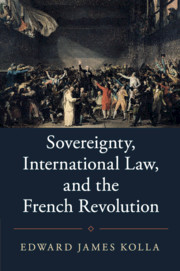 The advent of the principle of popular sovereignty during the French Revolution inspired an unintended but momentous change in international law. Edward James Kolla explains that between 1789 and 1799, the idea that peoples ought to determine their fates in international affairs, just as they were taking power domestically in France, inspired a series of new and interconnected claims to territory. Drawing on case studies from Avignon, Belgium, the Rhineland, the Netherlands, Switzerland, and Italy, Kolla traces how French revolutionary diplomats and leaders gradually applied principles derived from new domestic political philosophy and law to the international stage. Instead of obtaining land via dynastic inheritance or conquest in war, the will of the people would now determine the title and status of territory. However, the principle of popular sovereignty also opened up new justifications for aggressive conquest, and this history foreshadowed some of the most controversial questions in international relations today.

The chapters follow case studies in discrete locations; these case studies display both innovations in each case as well as continuity through the whole period of the book

Lists of maps
Acknowledgments
Introduction
1. Popular sovereignty and international law on the periphery of France
2. The union of Avignon and the challenges of self-determination
3. Revolutionary power and the annexation of Belgium
4. Strategic interests, survival, and the left bank of the Rhine
5. Between subject and sovereign states: the sister republics in the Netherlands, Switzerland, and Italy
Conclusion
Selected bibliography.

Edward James Kolla is Assistant Professor of History in the Edmund A. Walsh School of Foreign Service in Qatar, Georgetown University, Washington, DC.

For more information, please see the website of the publisher
Posted by Filip Batsele at 6:16 PM