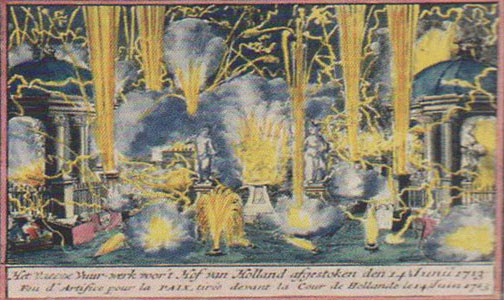 (fireworks at the occasion of the Peace of Utrecht; image source: Wikimedia Commons)


2013 marks the tricentenary of the peace treaties concluded at Utrecht (11 April 1713), which put an end to (part of) the War of the Spanish Succession. This last great war of Louis XIV's Grand Siècle brought war to the four corners of Europe, as well as to the overseas territories. After the treaties of Utrecht (1713, Rastatt (6 March 1714) and Baden (7 November 1714), Europe entered a rather exceptional peaceful interval in the "bellicose" early modern period, putting a provisional end to a century of uninterrupted bloodshed. The conferences which took place in Utrecht in the years 1712-1713 can be seen as a mirror of changes in intellectual, economic, political and dynastic thought, as well as of elite culture.


A provisional programme for the international conference hosted by Utrecht University and the Dutch-Belgian Society for Eighteenth Century Studies has just been released. The conference, which hosts 12 different panels, will devote attention to legal aspects (panels "Empire" and "Sovereignty"), as well as to the global history perspective.
Posted by Frederik Dhondt at 1:36 PM

Email ThisBlogThis!Share to TwitterShare to FacebookShare to Pinterest
Labels: Conference