PUBLICATION: Bill Davies on the 'reception' of European law and court decisions in Germany 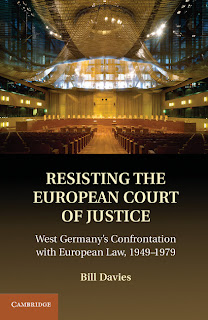 
The European Union's (EU) powerful legal framework drives the process of European integration. The Court of Justice (ECJ) has established a uniquely effective supranational legal order, beyond the original wording of the Treaty of Rome and transforming our traditional understanding of international law. This work investigates how these fundamental transformations in the European legal system were received in one of the most important member states, Germany. On the one hand, Germany has been highly supportive of political and economic integration; yet on the other, a fundamental pillar of the post-war German identity was the integrity of its constitutional order. How did a state whose constitution was so essential to its self-understanding subscribe to the constitutional practice of EU law? How did a country who could not say 'no' to Europe become the member state most reluctant to accept the new power of the ECJ?
Source: http://www.cambridge.org/gb/knowledge/isbn/item6796409/?site_locale=en_GB
Posted by Dr. Stefania Gialdroni at 2:43 PM