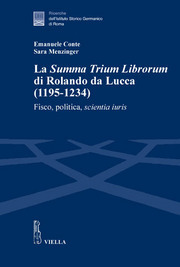 Emanuele Conte and Sara Menzinger have recently published the first critical edition of the most ancient treatise on public law produced by medieval legal science: the Summa Trium Librorum by Rolandus de Luca.

Rolandus, even though perfectly aware of the style and "tastes" of the Glossators of the 12th century, was not a professor: he was a judge, involved in the practice of the cities' courts as well as in the communal politics. His work brings us to reconsider the relationship between legal doctrine and institutional practice at the end of the 12th century, when the revival  of the Empire corresponded to the rise of the autonomy of the Italian city-states.


The long introduction to this critical edition aims at opening a new debate on medieval public law, which was developed with reference to the relationship between Empire and city-states. The theories and legal reasoning developed in this work, which is characterized by a deeply laic approach, are essential to fully understand the public law theories of the 13th century which have been a pivotal topic of medieval legal historical studies in the last decades.
For more information click here