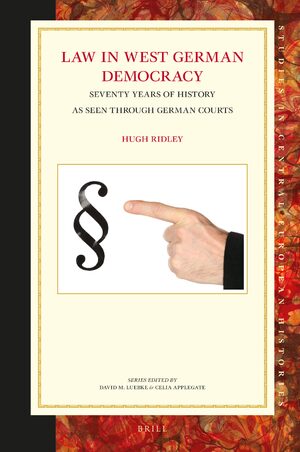 Brill is publishing a new book on law in Western German society.

Law in West German Democracy relates the history of the Federal Republic of Germany as seen through a series of significant trials conducted between 1947 and 2017, explaining how these trials came to take place, the legal issues which they raised, and their importance to the development of democracy in a country slowly emerging from a murderous and criminal régime. It thus illustrates the central issues of the new republic. If, as a Minister for Justice once remarked, crime can be seen as ‘the reverse image of any political system, the shadow cast by the social and economic structures of the day’, it is natural to use court cases to illuminate the eventful history of the Federal Republic’s first seventy years.

1 The Trial of Friedrich Flick
1 Understanding the ns State
2 Who Was Flick and on What Charges Did He Appear?
3 Legal Issues
4 The Sentence
5 Assessing the Verdict
6 The Repercussions of the Flick Trial

2 Adjusting the Political Landscape: Banning the kpd
1 The Banning of Political Parties
2 Outlawing the kpd
3 The Deliberations of the BVerfG
4 The Legal Consequences of the Ban
5 Reflections on Constitutional Courts and Politics

3 The Lüth Case – at What Price Freedom of Expression?
1 The Starting-Point: Artists and Nazism
2 The Call for a Boycott
3 The Decision of the BVerfG
4 Repercussions

4 Four Murders, and Reflections on Court-Reporting in the Federal German Press
1 Reporting the Law
2 Precedents in Weimar
3 The Federal Republic
4 A Routine Murder
5 Rosemarie Nitribitt
6 Two Women in Court
7 Hetzel’s Campaign for a Retrial
8 Conclusions

5 Personal Matters in Court: Homosexuality and Abortion
1 The Legacy of the Past
2 Post-War Shifts of Policy
3 The Frankfurt Homosexual Trials
4 § 218 in the Federal Republic
5 ‘It’s Not You, Doctor, Who Have Offended Me, but the Judges’
6 The Campaign against § 218 Moves Forward
7 The Last Razzia

6 The Spiegel Affair
1 The Dimensions of the Affair
2 Old Antagonisms
3 The Principal Legal Issue: Military Secrecy
4 A Brief Consideration of the BVerfG Judgment

8 The 1970s: The Campaign against Radicals – Ideology Becomes the Crime
1 Prologue
2 Background to the 1970s
3 The Legal Basis of the Berufsverbot
4 Three Individual Cases
5 The Legal Issues
6 The BVerfG Judgment
7 Dissenting Judges
8 Final Thoughts

9 Chasing after Sympathizers – Threats to the Rule of Law
1 Reactions to an Act of Terror
2 An Unwanted Requiem
3 Sympathizing with Terror?
4 The Knives Come Out
5 A Chequered History of Controlling Free Speech

10 The Rub of the Green – a Range of Environmental Cases
1 Historical Prologue
2 Environmental Protection in the Federal Republic
3 Violence among the Trees
4 Chemical Pollution – ‘Everyone the Loser’
5 Reflections on a Small Victory for the Environment
6 Problems of Atomic Power: Atomkraft? Nein Danke