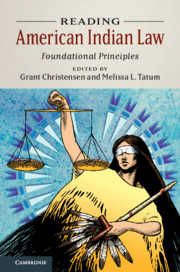 The study of American Indian law and policy usually focuses on federal statutes and court decisions, with these sources forming the basis for most textbooks. Virtually ignored is the robust and growing body of scholarly literature analyzing and contextualizing these primary sources. Reading American Indian Law is designed to fill that void. Organized into four parts, this book presents 16 of the most impactful law review articles written during the last three decades. Collectively, these articles explore the core concepts underlying the field: the range of voices including those of tribal governments and tribal courts, the role property has played in federal Indian law, and the misunderstandings between both people and sovereigns that have shaped changes in the law. Structured with flexibility in mind, this book may be used in a wide variety of classroom settings including law schools, tribal colleges, and both graduate and undergraduate programs.

Melissa L. Tatum is Research Professor of Law at the University of Arizona. She has served on the Southwest Intertribal Court of Appeals and has edited multiple volumes of tribal court opinions including for the Navajo Nation and the Muscogee (Creek) Nation. She is the author of Indigenous Justice: New Tools, Approaches, and Spaces (2018), Law, Culture & Environment (2014), and Structuring Sovereignty: Constitutions and Native Nations (2014).