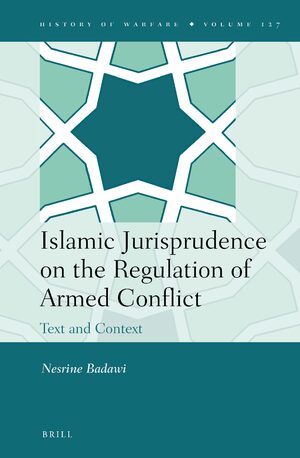 Brill is publishing a new book on the regulation of armed conflict in Islamic jurisprudence.

In Islamic Jurisprudence on the Regulation of Armed Conflict: Text and Context, Nesrine Badawi argues against the existence of a “true” interpretation of the rules regulating armed conflict in Islamic law. In a survey of formative and modern seminal legal works on the subject, the author sheds light on the role played by the sociopolitical context in shaping this branch of jurisprudence and offers a detailed examination of the internal deductive structures of these works.

Nesrine Badawi, Ph.D (2011), School of Oriental and African Studies, University of London, is an Assistant Professor of Public and International Law at the American University in Cairo. Her work focuses on the regulation of armed conflict in Islamic law.