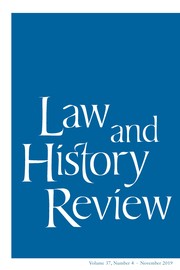 The Law and History Review has published its latest issue. Here the table of contents:

A People’s Constitution: The Everyday Life of Law in the Indian Republic—Rohit De reviewed by Arvind Elangovan 961
Marriage, Law, and Gender in Revolutionary China, 1940–1960—Xiaoping Cong reviewed by Yue Du 963
Legal Lessons: Popularizing Laws in the People’s Republic of China, 1949–1989—Jennifer Altehenger reviewed by Glenn Tiffert 966
The Law and Economics of Confucianism—Taisu Zhang reviewed by Maura Dykstra 968
Making Manslaughter: Process, Punishment and Restitution in Württemberg and Zurich, 1376–1700—Susanne Pohl-Zucker reviewed by Harriet Rudolph 971
Memory Laws, Memory Wars: The Politics of the Past in Europe and Russia—Nikolay Koposov reviewed by Ian Cram 973
Boundaries of the International: Law and Empire—Jennifer Pitts reviewed by Alexander Arnold 975
Black Litigants in the Antebellum American South—Kimberly M. Welch reviewed by Allison Madar 977
Slave Law and the Politics of Resistance in the Early Atlantic World—Edward B. Rugemer reviewed by H. Robert Baker 979
They Were Her Property: White Women as Slave Owners in the American South—Stephanie E. Jones-Rogers reviewed by Julia W. Bernier 981
The Burning House: Jim Crow and the Making of Modern America—Anders Walker reviewed by Brandon Jett 983