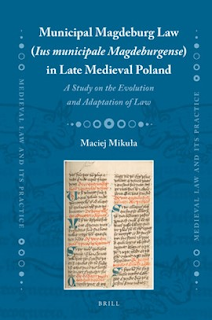 In this volume, Maciej Mikuła analyses the extant texts of the Ius municipale Magdeburgense, the most important collection of Magdeburg Law in late medieval Poland. He discusses the different translation traditions of the collection; the application of Magdeburg Law in different cities; how differences between the versions could affect the application of the rights; and how the invention of printing influenced the principle of legal certainty. Mikuła ultimately shows that the differences between the texts not only influenced legal practice, but also bear out how complex the process was of the adaptation of Magdeburg Law.

Maciej Mikuła, Ph.D. (2012), habilitation (2018), Jagiellonian University in Cracow, is Assistant Professor at that university. He has published monographs, editions and articles on law in medieval and early modern Poland.

Posted by Stefano Cattelan at 8:30 AM