The following list of questions indicates the main themes of the colloquium, but is suggestive rather than prescriptive.

·      Which ideas on good territorial governance circulated in Europe? For instance, in the late 18th century, Kameralwissenschaft and œconomie politique travelled the continent. E.g. the research of Christine Lebeau to Saxon grand commis in 1762-1768, which showed how knowledge, via personal libraries, interacted and was transformed. (Lebeau 1993) Have there been equivalent circulating ideas concerning territorial governance?
·      How were models of territorial administration transnationally diffused? Circulation was not seldom a product of Empire building. For instance, the Dutch gouverneurs and Italian prefetti drew on, and modified, French examples. (Karila-Cohen ed. forthcoming)
·      How did personal contacts inspire reform plans across national borders? National structures were constructed with imported building blocks. E.g. mid-1800s, European progressive liberals endeavoured to reform territorial governance using foreign experiences. (Randeraad 1994)
·      To what extent did state representatives themselves physically circulate their territory, Europe and beyond? E.g. officials held posts in many outskirts of the vast countries, and developed imperial careers in oversees possessions, which entailed an ongoing transformation of (administrative) practices. (Lambert & Lester ed. 2006)
·      Of which social networks did state representatives form part? E.g. personal experiences abroad shaped the later workings of state officials. Prior to their vocation, they might have studied abroad. Universities are known to have served as intellectual hubs where future officials were educated; via correspondence networks ideas ‘went viral’. (Leerssen 2011)

We invite proposals for 25 minute talks in English or French. Papers either take the form of a case study, or an original and unpublished synthesis. We encourage papers that take an empirical approach to the concept of ‘circulation’, focusing on specific relevant cases.

Please submit your proposal by e-mail to Pierre Karila-Cohen (pierre.karila-cohen[a]univ-rennes2.fr) and Martijn van der Burg (martijn.vanderburg[a]ou.nl) before 31st March 2017. Please note that only a limited amount of funding may be available to assist speakers to cover partial costs. Conference materials, lunches and dinners will be provided for. 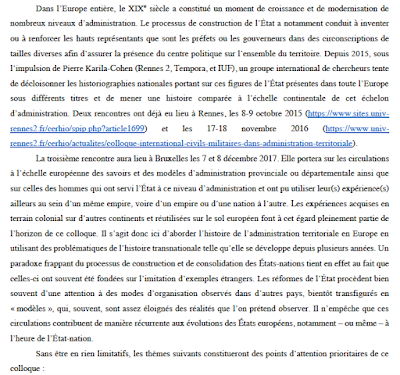 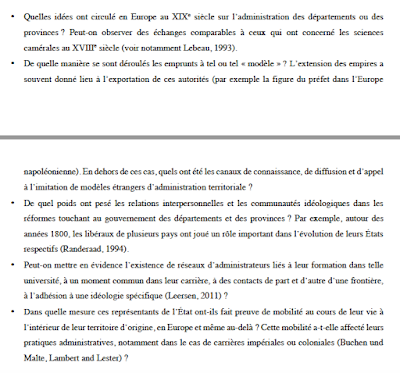 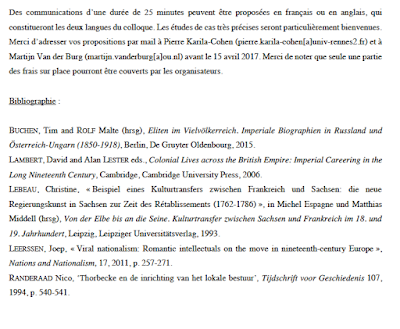