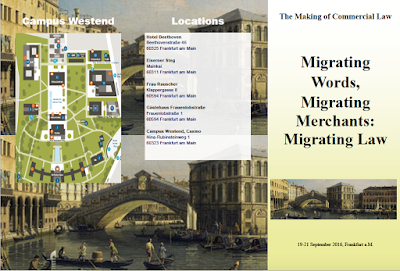 The Fondaco dei Tedeschi in the commercial center of Venice, by the eastern foot of the Rialto Bridge, represents the scope of this workshop – in all three regards suggested in the title.

The Italian word fondaco is a loanword from the Arabic فندق, ”funduq“, which in its turn roots in the Greek πανδοκεῖον, “pandokeion”. These three languages generally share an important vocabulary in regard to economy and trade, and the two younger ones, Arabic and Italian, apparently found both the word and the concept behind it useful enough to import it. The concept, although with important variations, always turns around the issue of housing, feeding, lodging, and controlling foreigners, as well as dealing with them in every sense of the word. Olivia Remie Constable examined both word and fact in her book “Housing the stranger in the Mediterranean World ” (2004) and was able to lay out the 2000-year long journey of the various ways how trade-faring cities and nations hosted and controlled strangers and namely foreign merchants. This is one spectacular example of a wide-spread phenomenon within the realm of commercial law. Let it suffice to list just a few more examples of “migrating words”, choosing three words of the language of the country in which the Commercial Revolution took off: Avaria, Accomandita, Bancarotta, and three words from today’s German (!) legal language: Leasing, Factoring, Franchising – words whose American origin is not necessarily obvious to German law students who use them every day.
The Fondaco dei Tedeschi also represents the “migrating merchants” in our title. Trading techniques are closely intertwined with the question how the merchant was travelling in order to learn the trade, accompany his goods, meet business associates, buy and sell, receive accounts, or even move and change the center of his commercial activity to a new city. It is a likely assumption that the migrating merchant carried his commercial and legal tools with him just like a stonemason would have carried his working tools with him on his way from one construction site to the next. But there, at the end of his journey from Nurnberg to Venice of from Dortmund to Bruges, the merchant encountered new ideas and techniques, and he must have compared his set of tools with those of his foreign partners. The early modern literature on commerce and commercial law (Stracca, Malynes, Marquard, Savary) has one main purpose: Inform the merchant about all matters relevant to his success on his journey and at the destination of his trading route.
The idea behind this workshop is to approach the “migration of laws” by following the migration of words and people in order to verify if, and to what extent, principles, rules and practices, especially in the mercantile world, moved by means of men in flesh and blood more than by means of books. If the interaction between the locals and the strangers, and more precisely the mutual learning process in regard to the daily commercial and legal routine can be considered the necessary premises for the spread of commercial practices, the diffusion of certain technical words provide a witness of the circulation of ideas and rules. The analysis of these two different and at the same time strictly connected kinds of “migrations” can provide a fresh point of view on the problem of the diffusion of commercial practices at a transnational level, with focus on the Mediterranean and Northern European seas.
Osmosis, hybridization, assimilation – a number of widely discussed key words spring to the mind. The two trading route examples were chosen with intention: In 1508, the City council of Nurnberg adopted the Venetian tutelage laws – a fact important enough to the lenders to boast with it by painting the scene in oil and hanging the painting into the Palazzo dei Dogi; and the Hanseatic merchant Hildebrand Veckinchusen who spent childhood years in Dortmund organized his book keeping by copying the model he encountered in Italian and Flemish firms after moving to Bruges around the year 1400. It won’t be hard to come up with additional examples but we will try to take the next step and ask: Why? The merchants adopting something foreign and new must have deemed it favorable, but based on what reflections? What did they find weak and disadvantageous about the usual, traditional ways they were brought up with? Were there regrets? After the failure of the Venetian Company Hildebrand’s brother Sivert Veckinchusen complained in a letter that they should better have stuck to the “old nourishment”, referring to the traditional trade along the axis Bruges-Lübeck-Novgorod. If we listen carefully, we can still hear Sivert sigh.