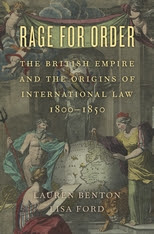 The Legal History Blog announced a forthcoming book by Lauren Benton & Lisa Ford, RAge for Order: The British Empire and the Origins of International Law, 1800-1850, at Harvard University Press. The book is available at a democratic price (€ 36).

International law burst on the scene as a new field in the late nineteenth century. Where did it come from? Rage for Order finds the origins of international law in empires—especially in the British Empire’s sprawling efforts to refashion the imperial constitution and use it to order the world in the early part of that century.
Lauren Benton and Lisa Ford uncover the lost history of Britain’s global empire of law in colonial conflicts and bureaucratic dispatches rather than legal treatises and case law. Tracing constitutional politics around the world, Rage for Order shows that attempts to refashion the British imperial constitution touched on all the controversial issues of the day, from slavery to revolution. Scandals in turbulent colonies targeted petty despots and augmented the power of the Crown to intervene in the administration of justice. Campaigns to police piracy and slave trading linked British interests to the stability of politically fragmented regions. Dull bureaucrats dominated legal reform, but they did not act in isolation. Indigenous peoples, slaves, convicts, merchants, and sailors all scrambled to play a part in reordering the empire and the world beyond it. Yet, through it all, legal reform focused on promoting order, not advancing human rights or charting liberalism.
Rage for Order maps a formative phase in world history when imperial, not international, law anchored visions of global order. This sweeping story changes the way we think about the legacy of the British Empire and the meaning of international law today.

Lauren Benton is Nelson O. Tyrone, Jr., Professor of History and Professor of Law at Vanderbilt University.
Lisa Ford is Associate Professor in History at the University of New South Wales.

“This book is a major achievement. Benton and Ford provide a powerful new way of understanding the global reach and effects of modern British imperialism. By connecting projects of colonial governance with new visions of global legal ordering, they offer a bold rethinking of the imperial context for the emergence of modern international law.”—Robert Travers, Cornell University
“The authors go deep into the archives to reveal the crucial interactions of countless colonial governors, crusading ship captains, misguided magistrates, inquisitive imperial commissioners, and frustrated Westminster bureaucrats whose words and deeds collectively constituted a nascent global legal order. By telling the often marvelous stories of law’s minions rather than its mandarins, Benton and Ford have done nothing less than help us understand the shambling character of our own international legal order as it arose out of empire two centuries ago.”—Paul D. Halliday, University of Virginia
“Benton and Ford marshal a vast array of archival evidence to shed new light on the development of law within and at the edges of the British Empire. They show that political and military activities were saturated with legal claims and that many and often competing actors—merchants and missionaries, sailors and convicts, middling officials and local elites—contributed to a ‘new vernacular imperial constitutionalism,’ with profound and unexpected consequences for international law.”—Jennifer Pitts, University of Chicago

1. A Global Empire of Law
2. Controlling Despotic Dominions
3. The Commissioner’s World
4. The Promise of Protection
5. Ordering the Oceans
6. An Empire of States
7. A Great Disorder
Notes
Acknowledgments
Index

Posted by Frederik Dhondt at 1:02 PM