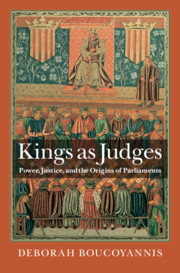 Cambridge University Press has recently published  Kings as Judges: Power, Justice, and the Origins of Parliaments

How did representative institutions become the central organs of governance in Western Europe? What enabled this distinctive form of political organization and collective action that has proved so durable and influential? The answer has typically been sought either in the realm of ideas, in the Western tradition of individual rights, or in material change, especially the complex interaction of war, taxes, and economic growth. Common to these strands is the belief that representation resulted from weak ruling powers needing to concede rights to powerful social groups. Boucoyannis argues instead that representative institutions were a product of state strength, specifically the capacity to deliver justice across social groups. Enduring and inclusive representative parliaments formed when rulers could exercise power over the most powerful actors in the land and compel them to serve and, especially, to tax them. The language of rights deemed distinctive to the West emerged in response to more effectively imposed collective obligations, especially on those with most power.