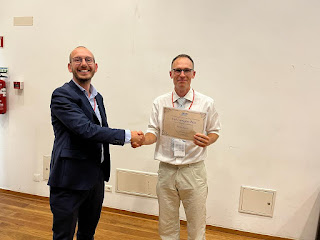 The ESCLH awarded the 2022 Van Caenegem Prize to dr. Paolo Astorri (Copenhagen) for his article “Can a judge rely on his private knowledge? Early modern Lutherans and Catholics compared”, which appeared in issue 1 of vol IX of the Society’s journal Comparative Legal History (DOI 10.1080/2049677X.2021.1908935).

This article examines the opinions of Catholic and Lutheran authors on the question of whether a judge should decide a case according to his personal knowledge when that knowledge conflicts with the charges and evidence at the trial. The majority of the Catholics contended that the judge had to follow the evidence. They distinguished between the judge as a public functionary and as a private man. The judge could not use in a trial what he knew as a man. There were certain Lutherans whose opinions remained close to this position. However, a significant number argued that the distinction between the judge as a functionary and as a man lacked foundation. Divine law commanded the judge to avoid lies and not to kill an innocent. If the judge knew that someone was innocent and nonetheless condemned him by following the evidence at the trial, he committed a sin. To avoid giving an unjust sentence, the judge had to use the knowledge he had obtained privately.

Previous winners can be found on the Prize’s page on this blog.

For more information on the contribution to legal history of the late prof. Em. Dr. Dr. H.c. Mult. Raoul Charles Baron Van Caenegem, we refer to this article by prof. Dr. Dirk Heirbaut.

Posted by Frederik Dhondt at 5:21 PM