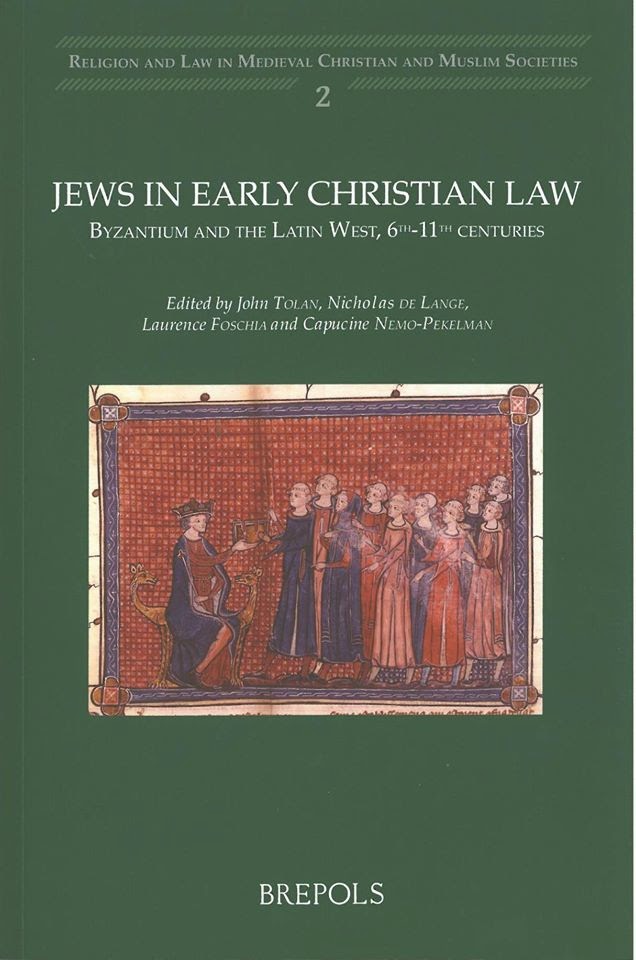 The sixth to eleventh centuries are a crucial formative period for Jewish communities in Byzantium and Latin Europe: this is also a period for which sources are scarce and about which historians have often had to speculate on the basis of scant evidence. The legal sources studied in this volume provide a relative wealth of textual material concerning Jews, and for certain areas and periods are the principal sources. While this makes them particularly valuable, it also makes their interpretation difficult, given the lack of corroborative sources.
The scholars whose work has been brought together in this volume shed light on this key period of the history of Jews and of Jewish-Christian relations, focusing on key sources of the period: Byzantine imperial law, the canons of church councils, papal bulls, royal legislation from the Visigoths or Carolingians, inscriptions, and narrative sources in Hebrew, Greek and Latin. The picture that emerges from these studies is variegated. Some scholars, following Bernhard Blumenkranz, have depicted this period as one of relative tolerance towards Jews and Judaism; others have stressed the intolerance shown at key intervals by ecclesiastical authors, church councils and monarchs.
Yet perhaps more than revealing general tendencies towards "tolerance" or "intolerance", these studies bring to light the ways in which law in medieval societies serves a variety of purposes: from providing a theologically-based rationale for social tolerance, to attempting to regulate and restrict inter-religious contact, to using anti-Jewish rhetoric to assert the authority or legitimacy of one party of the Christian elite over and against another. This volume makes an important contribution not only to the history of medieval Jewish-Christian relations, but also to research on the uses and functions of law in medieval societies.

III - Juridical sources as indications of Jewish life and institutions?
8.         Alexander Panayotov, Jewish Communal Offices in Byzantine Law and Jewish Inscriptions from the Balkans
9.         Bat-Sheva Albert, Les communautés juives vues à travers la législation royale et ecclésiastique visigothique et franque
10.       Raul González-Salinero, The Legal Eradication of the Jewish Literary Legacy in Visigothic Spain
11.       Johannes Heil, Getting them in or Keeping them out? Theology, Law, and the Beginnings of Jewish Life at Mainz in the 10th and 11th centuries
IV - From the Law to Violence, from Violence to Law
12.        Paul Magdalino, ‘All Israel will be saved’? The forced baptism of the Jews and imperial eschatology
13.        Rachel Stocking, Forced Converts, “Crypto-Judaism,” and Children: Religious Identification in Visigothic Spain
14.        María Jesús Fuente, Jewish Women and Visigoth Law
15.        Oscar Prieto Dominguez, The mass conversion of Jews decreed by Emperor Basil I in 873: its reflection in contemporary legal codes and its underlying reasons
16.        Amnon Linder, The Jewish Oath

Nicholas de Lange and John Tolan, Conclusion
Posted by Unknown at 11:27 AM