NOTICE: The Creation of the Ius Commune: From Casus to Regula

I'm delighted to announce the publication of The creation of the ius commune: from casus to regula. Edited by Professors John Cairns and Paul Du Plessis, both of Edinburgh University, it

discusses in detail how medieval scholars reacted to the casuistic discussions in the inherited Roman texts, particularly the Digest of Justinian. It shows how they developed medieval Roman law into a system of rules that formed a universal common law for Western Europe. Because there has been little research published in English beyond grand narratives on the history of law in Europe, this book fills an important gap in the literature.

With a focus on how the medieval Roman lawyers systematised the Roman sources through detailed discussions of specific areas of law, it considers: 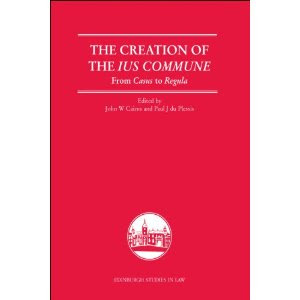 With contributions from leading international scholars in the field, this book therefore fills an important gap in the literature.

Introduction: Themes and Context (Cairns and Du Plessis)
1. An Introduction to the Interpretation of Legal Technicalities (Bezemer);
2. The Citation and the Ius Commune (Helmholz);
3. Medieval Family Law (Waelkens);
4. Legal Reasoning in Contract and Delict (Gordley);
5. The Buyer’s Remedy for Latent Defects (Hallebeek);
6. Commercial Law (Ernst);
7. The Law of Unjustified Enrichment (Schrage/Dondorp);
8. The Law of Succession (Ryan);
9. The Roman Law of Property and the Reality of the Middle Ages (Rüfner);
10. Fault-lines between contract and property in the medieval law of pledge (Du Plessis);11. Malicious litigation and the rise of the legal profession (Brundage).


For additional information see the Edinburgh Studies in Law site or Amazon.co.uk/com.
Posted by Unknown at 7:38 PM