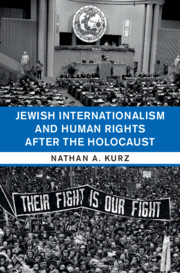 Cambridge University Press is publishing a book on the relationship between Jewish internationalism and international rights protection in the second half of the twentieth century.

Nathan A. Kurz charts the fraught relationship between Jewish internationalism and international rights protection in the second half of the twentieth century. For nearly a century, Jewish lawyers and advocacy groups in Western Europe and the United States had pioneered forms of international rights protection, tying the defense of Jews to norms and rules that aspired to curb the worst behavior of rapacious nation-states. In the wake of the Holocaust and the creation of the State of Israel, however, Jewish activists discovered they could no longer promote the same norms, laws and innovations without fear they could soon apply to the Jewish state. Using previously unexamined sources, Nathan Kurz examines the transformation of Jewish internationalism from an effort to constrain the power of nation-states to one focused on cementing Israel's legitimacy and its status as a haven for refugees from across the Jewish diaspora.

Nathan A. Kurz has taught at Yale University and Birkbeck College, University of London and has served a visiting fellow at Oxford University.

1. “Individual rights were not enough for true freedom”

2. Who Will Tame the Will to Defy Humanity?

5. From Antisemitism to “Zionism is Racism”

6. The Inadequacy of Madison Avenue Methods

7.“Good words have become the servants of evil masters”