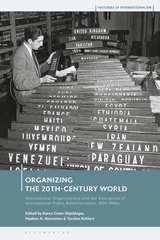 Bloomsbury is publishing a new book on the emergence of international public administrations.

International Organizations play a pivotal role on the modern global stage and have done, this book argues, since the beginning of the 20th century. This volume offers the first historical exploration into the formative years of international public administrations, covering the birth of the League of Nations and the emergence of the second generation that still shape international politics today such as the UN, NATO and OECD.

Centring on Europe, where the multilaterization of international relations played out more intensely in the mid-20th century than in other parts of the world, it demonstrates a broad range of historiographical and methodological approaches to institutions in international history. The book argues that after several 'turns' (cultural, linguistic, material, transnational), international history is now better equipped to restate its core questions of policy and power with a view to their institutional dimensions. Making use of new approaches in the field, this book develops an understanding of the specific powers and roles of IO-administrations by delving into their institutional make-up.

Chapter 3 The Biography as Institutional Can-Opener: An Investigation of Core Bureaucratic Practices in the Early Years of the League of Nations Secretariat

Chapter 5: The Influence of the United States on the Rise of Global Governance in

Education: The OEEC and UNESCO in the Post-World War II Period,

Chapter 6: Learning Across Institutions – the Officials of the ECSC High Authority and EEC Commission, Katja Seidel, University of Westminster, UK

Chapter 9: The Avant-Garde of the League: The International Federation of League of Nations Societies and their Part in Governing the World, Anne Isabel Richard, Leiden University, The Netherlands