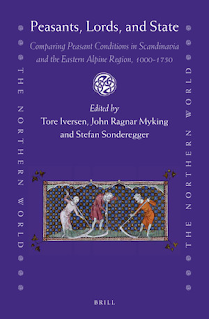 Peasants, Lords and State: Comparing Peasant Conditions in Scandinavia and the Eastern Alpine Region, 1000-1750 challenges the once widespread view, rooted in the historical thinking of the nineteenth century, that Scandinavian and especially Norwegian peasants enjoyed a particular “peasant freedom” compared to their Continental counterparts. Markers of this supposed freedom were believed to be peasants’ widespread ownership of land, extensive control over land and resources, and comprehensive judicial influence through the institution of the thing. The existence of slaves and unfree people was furthermore considered a marginal phenomenon. The contributors compare Scandinavia with the eastern Alpine region, two regions comprising fertile plains as well as rugged mountainous areas. This offers an opportunity to analyse the effect of topographical factors without neglecting the influence of manorial and territorial power structures over the long time-span of c.1000 to 1750.

Tore Iversen, Dr. Art (1994), Professor emeritus in medieval history at the Norwegian University of Science and Technology. He has published monographs and articles on medieval slavery, property and land tenancy in a Scandinavian and European context.

John Ragnar Myking, Dr. Art (2003), Professor emeritus in medieval and early modern history at Western Norwegian University of Applied Sciences. He has published monographs and articles on land tenancy in a European context and local and regional history.

Stefan Sonderegger, Dr. (1994), Professor in medieval history at the University of Zurich and Head of the City Archive of St.Gallen, Switzerland. His research focuses on economic history and the editing of documents.

Part 3: The Portrayal of Peasants in National Historiography

6 The Historian as Architect of Nations: A Historiographical Analysis of the Norwegian Peasantry as Carrier of National Ideology and Identity in the Medieval and Early Modern Period

7 The Participation of the Tyrolean Peasantry in the Government of the Country: Theory – Reality – Ideology

Active Manorial Lords and Peasant Farmers in the Economic Life of the Late Middle Ages: Results from New Swiss and German Research

Posted by Stefano Cattelan at 12:15 PM