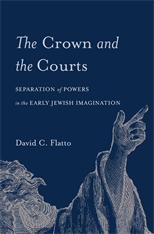 Harvard University Press is publishing a new book on the separation of powers in the early Jewish imagination.

A scholar of law and religion uncovers a surprising origin story behind the idea of the separation of powers.

The separation of powers is a bedrock of modern constitutionalism, but striking antecedents were developed centuries earlier, by Jewish scholars and rabbis of antiquity. Attending carefully to their seminal works and the historical milieu, David Flatto shows how a foundation of democratic rule was contemplated and justified long before liberal democracy was born.

During the formative Second Temple and early rabbinic eras (the fourth century BCE to the third century CE), Jewish thinkers had to confront the nature of legal authority from the standpoint of the disempowered. Jews struggled against the idea that a legal authority stemming from God could reside in the hands of an imperious ruler (even a hypothetical Judaic monarch). Instead scholars and rabbis argued that such authority lay with independent courts and the law itself. Over time, they proposed various permutations of this ideal. Many of these envisioned distinct juridical and political powers, with a supreme law demarcating the respective jurisdictions of each sphere. Flatto explores key Second Temple and rabbinic writings—the Qumran scrolls; the philosophy and history of Philo and Josephus; the Mishnah, Tosefta, Midrash, and Talmud—to uncover these transformative notions of governance.

The Crown and the Courts argues that by proclaiming the supremacy of law in the absence of power, postbiblical thinkers emphasized the centrality of law in the people’s covenant with God, helping to revitalize Jewish life and establish allegiance to legal order. These scholars proved not only creative but also prescient. Their profound ideas about the autonomy of law reverberate to this day.

David C. Flatto, Professor of Law and of Jewish Philosophy at The Hebrew University of Jerusalem, is a scholar of Jewish law and philosophy as well as comparative constitutional law and jurisprudence.

Introduction: Law and Power in Biblical and Western Jurisprudence

4. Josephus on Kingship, Theocracy, and Law

5. Kingship and Law in Tannaitic Literature

7. The Nasi and the Judiciary in Rabbinic Literature