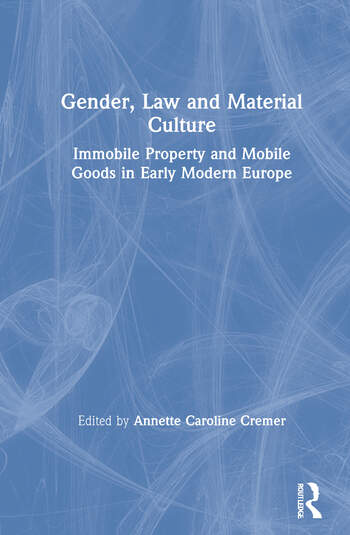 Routledge is publishing a new book on immobile property and mobile goods in Early Modern Europe.

This interdisciplinary volume discusses the division of the early modern material world into the important legal, economic and personal categories of mobile and immobile property, possession and the rights to usufruct.

The essays describe and compare different modes of acquisition and inter-generational transfer via law and custom. The varying perspectives, including cultural history, legal history, social and economic history, philosophy and law, allows for a more nuanced understanding of the links between the movability of an object and the gender of the person who owned, possessed or used it. Case studies and examples come from a wide geographical range including Norway, Scotland, Italy, Tyrol, Greece, Romania, Brazil, Jamaica and the English colonies. By covering both urban and rural areas and exploring all social groups, from ruling elites to the lower strata of society, the essays offer fresh insight into the division of mobile and immobile property that socially and economically posed disadvantages for women.

By exploring a broad scope of topics including landownership, marriage contracts, slaveholding and the dowry, this book is an essential resource for both researchers and students of women’s history, social and economic history and material culture.

Annette Caroline Cremer is an Assistant Professor at the History Faculty at Giessen University, Germany. She has published several books in the field of material culture research, European cultural history in the seventeenth-eighteenth centuries, court culture and gender history.