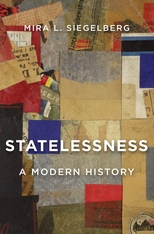 Harvard University Press is publishing a new book on the modern history of statelessness.

The story of how a much-contested legal category—statelessness—transformed the international legal order and redefined the relationship between states and their citizens.

Two world wars left millions stranded in Europe. The collapse of empires and the rise of independent states in the twentieth century produced an unprecedented number of people without national belonging and with nowhere to go. Mira Siegelberg’s innovative history weaves together ideas about law and politics, rights and citizenship, with the intimate plight of stateless persons, to explore how and why the problem of statelessness compelled a new understanding of the international order in the twentieth century and beyond.

In the years following the First World War, the legal category of statelessness generated novel visions of cosmopolitan political and legal organization and challenged efforts to limit the boundaries of national membership and international authority. Yet, as Siegelberg shows, the emergence of mass statelessness ultimately gave rise to the rights regime created after World War II, which empowered the territorial state as the fundamental source of protection and rights, against alternative political configurations.

Today we live with the results: more than twelve million people are stateless and millions more belong to categories of recent invention, including refugees and asylum seekers. By uncovering the ideological origins of the international agreements that define categories of citizenship and non-citizenship, Statelessness better equips us to confront current dilemmas of political organization and authority at the global level.

Mira L. Siegelberg is University Lecturer in the History of International Political Thought at the University of Cambridge and a past member of the Princeton University Society of Fellows.

1. From a Subject of Fiction to a Legal Reality

4. The Real Boundaries of Membership

5. A Condition of World Order

Email ThisBlogThis!Share to TwitterShare to FacebookShare to Pinterest
Labels: Immigration and Identity, nationality