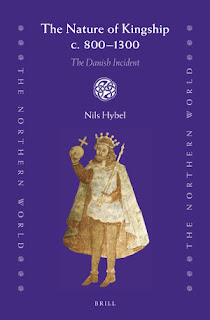 In The Nature of Kingship c. 800-1300. The Danish Incident Nils Hybel presents the first comprehensive history of the changeable nature of monarchial power in Danish territories from the Viking Age to the Central Middle Ages. The work offers a pioneering methodological approach entirely based on medieval conceptions on sovereign power. This innovative approach involves contemporary ideas, not modern notions of power and kingship, being used to undertake the analysis. The Danish “Incident” is therefore integrated within the European context. Kingship experienced a profound transformation during the half millennium investigated. A royal genealogy and strong bonds with Christian institutions were established in the late eleventh century. In the middle of the twelfth century the Danish realm was united, followed by the final liberation from German hegemony and the expansion of the realm with German and Slavic fiefs in the late twelfth century. At the same time, with the first signs of taxation, legislation, law enforcement and the notion of a national, military force, kings began the transition from warlords to medieval kingship. With stirrings of constitutionalism from 1241 onwards, this development of a national, medieval, kingdom intensified, though by c. 1300 the kingdom had not yet reached the point of total sovereign power.

Nils Hybel, Ph.D. (1989), is Professor at the Saxo Institute, the University of Copenhagen. He has published extensively on many aspects of European medieval history and historiography.

The Birth of the Viking Age

A Medieval Kingdom of the Viking Age

The Birth of Medieval Kingship

Historic Kings in Sources from c. 1140

Narratives of the Earliest Danish Laws

Extant Laws and Ordinances before 1241

Monarchical Legislation and Jurisdiction before 1241

Extant Laws and Ordinances from 1241

Monarchical Legislation and Jurisdiction from 1241

Towards a Public Army?

The Geopolitical Area of Denmark before the Mid-Eleventh Century

Towards the Formation of a Realm

Posted by Stefano Cattelan at 11:08 AM