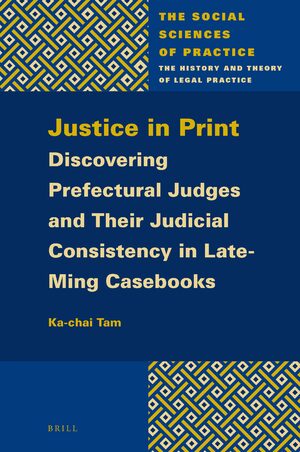 Brill is publishing a new book on prefectural judges in the judiciary of the Ming Dynasty.

In Justice in Print: Discovering Prefectural Judges and Their Judicial Consistency in Late-Ming Casebooks, Ka-chai Tam argues that the prefectural judge in the judiciary of the Ming dynasty (1368–1644) became crucial to upholding justice in Chinese society.

In light of two late Ming casebooks, namely the Mengshui zhai cundu (盟水齋存牘) by Yan Junyan and the Zheyu xinyu (折獄新語) by Li Qing, Ka-chai Tam demonstrates that the late Ming judges handled their cases with a high level of consistency in judicial reasoning and practice in every type of case, despite their differing regions and literary styles. Equipped with relative institutional independence and growing professionalism, they played an indispensable role in checking and guaranteeing the legal performance of their subordinate magistrates.

Ka-chai Tam, D.Phil. (2009), University of Oxford, is Assistant Professor in History at the Hong Kong Baptist University. He has published several dozen articles on the social and maritime history of late imperial China and Chinese legal history.


3 Favorable Institutional Circumstances for the Development of Judicial Professionalism