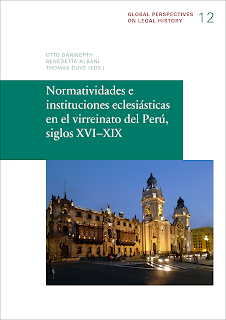 Ecclesiastical institutions and actors played key roles in the formation of normative orders in early modern Ibero-America. Their importance, which has already been illustrated by an earlier volume on New Spain (GPLH 5, published in 2018), is now further corroborated and explored in case studies focusing on the viceroyalties of Peru and of Río de la Plata.

The eight chapters of this Spanish-speaking volume deal with a diversity of themes relating to both urban and rural locations in what is now Peru, Bolivia, Argentina and Chile. They examine the ecclesiastical legislation of Toribio de Mogrovejo, explore the role of legal experts in canon law litigation, compare the activities of Jesuit missionaries in Austria and Peru, explain the life of the nuns in the Monasterio de la Concepción in Lima, discuss problems of diocesan administration in outlying zones of the archdiocese of La Plata, and analyse the ius patronatus in Chile during the independence movement.

The editors’ purpose has been to present approaches that explore the relationship between different types of normativities, their local adaptations, their links to global debates, the forms of conflict resolution, as well as the role of jurists, theologians and other actors. The contributions propose new research fields for legal history and the history of the Church, but are also relevant for social and cultural historians. They contribute to a better understanding of the normative religious universe of Ibero-America between the 16th and 19th centuries. An upcoming third volume will cover the viceroyalty of New Granada, and the tetralogy will be completed with a final volume on Brazil.