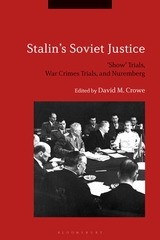 Bloomsbury has published a new edited collection on law and the justice system under Joseph Stalin.

From the 'show' trials of the 1920s and 1930s to the London Conference, this book examines the Soviet role in the Nuremberg IMT trial through the prism of the ideas and practices of earlier Soviet legal history, detailing the evolution of Stalin's ideas about the trail of Nazi war criminals.

Stalin believed that an international trial for Nazi war criminals was the best way to show the world the sacrifices his country had made to defeat Hitler, and he, together with his legal mouthpiece Andrei Vyshinsky, maintained tight control over Soviet representatives during talks leading up to the creation of the Nuremberg IMT trial in 1945, and the trial itself. But Soviet prosecutors at Nuremberg were unable to deal comfortably with the complexities of an open, western-style legal proceeding, which undercut their effectiveness throughout the trial. However, they were able to present a significant body of evidence that underscored the brutal nature of Hitler's racial war in Russia from 1941-45, a theme which became central to Stalin's efforts to redefine international criminal law after the war.

Stalin's Soviet Justice provides a nuanced analysis of the Soviet justice system at a crucial turning point in European history and it will be vital reading for scholars and advanced students of the legal history of the Soviet Union, the history of war crimes and the aftermath of the Second World War.

David M. Crowe is Presidential Fellow at Chapman University, USA and Professor Emeritus of History & Law at Elon University, USA. He has been a Visiting Scholar at Columbia University's Harriman Institute and a Fellow at the Center for Slavic, Eurasian, and East European Studies at the University of North Carolina at Chapel Hill. He is the recipient of the Southern Conference on Slavic Studies' 2010 Richard Stites Senior Scholar Award for Contributions to the Field of Slavic Studies.