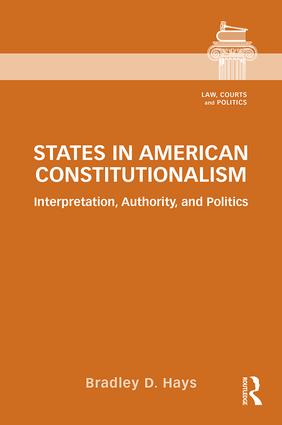 Routledge has published a new book on the role of states in US constitutionalism on the basis of historical case studies.

States in American Constitutionalism: Interpretation, Authority, and Politics examines the often overlooked role that states have played in the development and maintenance of American constitutionalism by examining the purpose and effect of state resolutions on national constitutional meaning. From colonial practices through contemporary politics, subnational governments have made claims about what national constitutional provisions and principles ought to mean, fashioned political coalitions to back them, and asserted their authority to provoke constitutional settlement. Yet, this practice has been far from static. Political actors have altered the practice in response to their interpretive objectives and the political landscape of the day. States in American Constitutionalism explains both the development of the practice and the way each innovation to the practice affected subsequent iterations.

Hays presents a series of case studies that explore the origins of the practice in colonial constitutionalism, its function in the early Republic, subsequent developments in antebellum and twentieth century politics, and contemporary practice in the first two decades of the twenty-first century.

States in American Constitutionalism will be of great interest to students and academics interested in constitutional law and politics, political and constitutional development, and federalism.

Bradley D. Hays is an associate professor of political science at Union College. He received his Ph.D. in government and politics from the University of Maryland, has held faculty positions at the Catholic University of America and the University of Nevada, Las Vegas, and been a junior fellow at the Clough Center for the Study of Constitutional Democracy at Boston College. He writes on constitutional politics and political development. He is also "scholar in residence" at WAMC Northeast Public Radio.