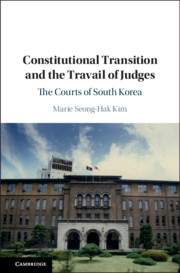 Cambridge University Press is publishing a new book on the history of courts in South Korea from 1945 to the present day.

This book looks at the history of the courts in South Korea from 1945 to the contemporary period. It sets forth the evolution of the judicial process and jurisprudence in the context of the nation's political and constitutional transitions. The focus is on constitutional authoritarianism in the 1970s under President Park Chung Hee, when judges faced a positivist crisis as their capacity to protect individual rights and restrain the government was impaired by the constitutional language. Caught between the contending duties of implementing the law and pursuing justice, the judges adhered to formal legal rationality and preserved the fundamental constitutional order, which eventually proved essential in the nation's democratization in the late 1980s. Addressing both democratic and authoritarian rule of law, this volume prompts fresh debate on judicial restraint and engagement in comparative perspectives.

Marie Seong-Hak Kim, St Cloud State University, Minnesota
Marie Seong-Hak Kim is a legal historian and attorney at law. She specializes in Korean, Japanese, and French law. She is the author of Michel de L'Hôpital (1997) and Law and Custom in Korea (Cambridge, 2012), and the editor of The Spirit of Korean Law (2015). She is the recipient of the National Endowment of Humanities Fellowship and the Fulbright Senior Scholar Grant. She was a fellow at the Collegium de Lyon, Netherlands Institute for Advanced Study, and Freiburg Institute for Advanced Studies. As a native of South Korea, she graduated from Ewha Womans University in Seoul, and received her Ph.D. and J.D. from the University of Minnesota. She is a member of the Minnesota Bar since 1995.