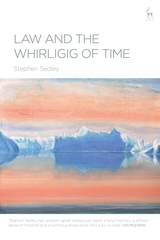 
For over 30 years, first as a QC, then as a judge, and latterly as a visiting professor of law at Oxford, Stephen Sedley has written and lectured about aspects of the law that do not always get the attention they deserve.His first anthology of essays, Ashes and Sparks, was praised in the New York Times by Ian McEwan for its 'exquisite, finely balanced prose, the prickly humour, the knack of artful quotation and an astonishing historical grasp'. 'You could have no interest in the law,' McEwan wrote, 'and read his book for pure intellectual delight.'The present volume contains more recent articles by Stephen Sedley on the law, many of them from the London Review of Books, and lectures given to a variety of audiences.The first part is concerned with law as part of history - Feste's 'whirligig of time'; the second part with law and rights.The third part is a group of biographical and critical pieces on a number of figures from the legal and musical worlds. The final part is more personal, going back to the author's days at the bar, and then forward to some parting reflections.

History1. Law as History
2. The History of English Law
3. Human Rights and the Whirligig of Time
4. A Glorious Revolution?
5. Judges and Ministers
6. Obscenity and the Margin of Appreciation
7. Does the Separation of Powers Still Work?

Law and Rights
8. The Role of the Judge
9. Anonymity and the Right to Lie
10. Dealing with Strasbourg
11. Speaking in Tongues
12. The Public Interest
13. Judicial Misconduct
14. Recusal: When Should a Judge Not Be a Judge?
15. The Right to Die
16. The Brexit Case
17. The Supreme Court
18. Arbitration
19. Detention without Trial
20. Originalism
21. Colonels in Horsehair
22. The British Constitution
23. A New Constitution?
24. Freedom of Expression
25. The Abuse of Power
26. A Compensation Culture?

Occasional Pieces
38. A Commonplace Book
39. Under Milk Wood Lost and Found
40. Getting It Wrong
Afterword: A Different Cat

More information with the publisher.
Posted by Frederik Dhondt at 10:15 AM