The Van Caenegem Prize is awarded every second year to the young legal historian who is deemed to have written the best article published in the society's journal "Comparative Legal History". The winner is determined by a committee. For the Van Caenegem Prize 2018, the committee has selected dr. Shavana Musa (University of Manchester), for her article "Victims of maritime conflict, compensation claims and the role of the admiralty court in the early modern period", (2017) 5 Comparative Legal History 125-141, as the winner.

The abstract of dr. Musa's article:

Victims of war have existed since time immemorial and, in the same vein, so have certain mechanisms for the redress of their injuries. Admiralty courts in early modern Europe are historical platforms in which certain groups of victims of maritime conflict could seek compensation under an international prize jurisdiction, as per the law of nations. This article will briefly introduce the reader to the way in which European countries applied their prize jurisdiction. It will then focus on compensation cases during the Anglo-Dutch Wars of the seventeenth century to show how admiralties implemented the right to compensation during these conflicts.

The fulltext is available here.

At the 2018 ESCLH conference in Paris the society was able to award the Second ESCLH Poster Prize funded by Springer. The poster competition allows PhD-students to present their research in the field of comparative legal history in form of a poster. The competition was won by Murat Burak Aydin, MaxPlanck Institute for European Legal History, Frankfurt." Burak Aydin's poster can be found below (click to enlarge). 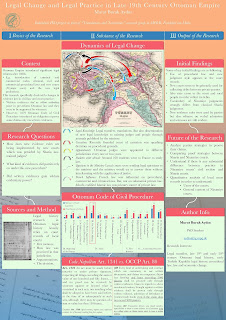 Posted by Frederik Dhondt at 5:00 PM