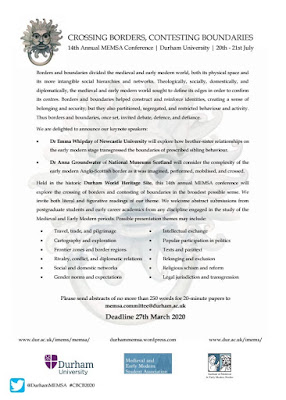 We learned of a call for papers for a conference organised by the Student Association (MEMSA) of the Institute of Medieval and Early Modern Studies (IMEMS), Durham University. Here the call:

The finale of MEMSA's academic year is its own postgraduate conference in Durham which attracts a wide variety of postgraduates and academics from across the UK and beyond. Previous conference themes have included: Being Human (2008), Authority (2009), Time and Memory (2010), Recognizing Beauty (2011), and The Mutilated Body (2013). Each year, the conference has welcomed a wide variety of highly original and engaging postgraduate papers, and has enjoyed the privilege of hearing internationally regarded keynote speakers, including Prof. Helen Cooper, Dr John Watts, Prof. Miri Rubin, and Prof. Mary Carruthers, present their research. Journals from previous conferences can be found on the MEMSA WordPress site by clicking this link: https://durhammemsa.wordpress.com/memsa-conferences-and-conference-proceedings/

Please send abstracts of no more than 250 words for 20-minute papers to memsa.committee@durham.ac.uk

Deadline 27th March 2020
Borders and boundaries divided the medieval and early modern world, both its physical space and its more intangible social hierarchies and networks. Theologically, socially, domestically, and diplomatically, the medieval and early modern world sought to define its edges in order to confirm its centres. Borders and boundaries helped construct and reinforce identities, creating a sense of belonging, safety, and security; but they also partitioned, segregated, and restricted both individual and group behaviour and activity. Thus borders and boundaries, once set, invited debate, defence, and defiance.

We are delighted to announce our keynote speakers:

• Dr Emma Whipday: Newcastle University, Department of English Studies will explore how brother-sister relationships on the early modern stage transgressed the boundaries of prescribed sibling behaviour.
• Dr Anna Groundwater: National Museums Scotland will consider the complexity of the early modern Anglo-Scottish border as it was imagined, performed, mobilised, and crossed.

Held in the historic Durham World Heritage Site, this 14th annual MEMSA conference will explore the crossing of borders and contesting of boundaries in the broadest possible sense. We invite both literal and figurative readings of our theme. We welcome abstract submissions from postgraduate students and early career academics from any discipline engaged in the study of the Medieval and Early Modern periods.

Possible presentation themes may include: